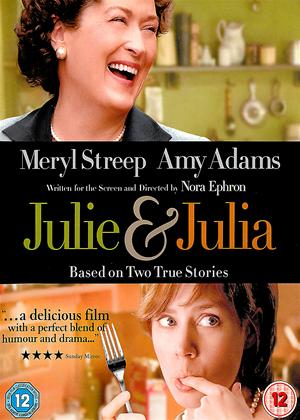 Reviews (3) of Julie and Julia

This is a good entertaining movie with a good performance from Meryl Streep. It's a bit of a girlie movie but none the less good entertainment for all.

I agree that this is a real girlie movie - well, it was directed and produced by Noro Ephron - but I enjoyed it WAY more than I thought I would.

The blending of the the biographies and stories of 2 women works wonderfully well, and Meryl Streep's performance is superb (it is just plain silly to call her 'annoying' for portraying an annoying real life woman! Or are we going to call all actors who portray Hitler, 'evil'?)

I had never ever heard of Julia Child before this movie - but then Americans have never heard of Elizabeth David, the British equivalent to her (NOT Fanny Cradock who was later and no elite cook either).

One major flaw here is that this film claims no book in English exists on French cooking and so Julia decides to write one. Balderdash! There have been such books since 19th century at least (Alexis Soyer onwards) and Elizabeth David beat Julian Child to it by a decade or more too! Still, we are all used to Hollywood rewriting history for American audiences.

I got bored with a lot of the girlie loss of confidence piffle of the modern character (Julie), and thought her rather wet and self-pitying: but the story was obviously trying to gain sympathy for the character amongt a female audience who were probably rooting for her and feeling her pain...

The revelation here is that a male audience can also enjoy this movie - especially those men who love cooking and food.

Anyway, this is a feelgood movie, stuffed with delicious food, and nicely paced, acted and directed. It won't knock your socks off, but it's a pleasant watch - and Meryl Streep's husband's character is superbly portrayed (though the director trying to make the upper class old money East coast Julian into a Democratic anti-McCarthyist heroine is clumsy and unnecessary: the movie needs food, not feminist or Democrat politics!)

Julie & Julia is flawed from the off as we have two best selling biographies blended into one film despite being decades apart. Amy Adam’s character comes to prominence because of her homage to chef Julia Child, annoyingly depicted by Meryl Streep. The persistent feeling throughout the film is we should be focusing on Julie Powell’s year of following Child’s classic cooking book. She being the American equivalent of own Fanny Cradock. As always Adams is extremely likeable and the uncomfortable ending demonstrates how these two chefs should have been kept apart.