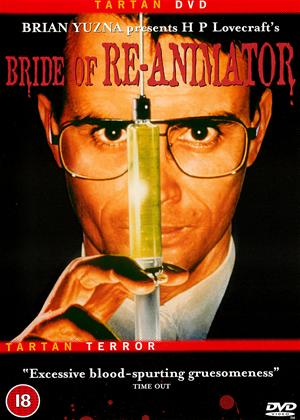 Synopsis:
It's been five years since the Miskatonic massacre, and Doctors Herbert West and Dan Cain are on medical duty in a bloody Peruvian border war. There, West makes a startling discovery: not only can his serum reanimate the dead, but when mixed with a rare fluid, it can bring limbs back to life - completely independent of body and brain! Now they possess the power to 'create' new life. And when the two doctors return to the Miskatonic Hospital in Massachusetts, that is exactly what they do. Stealing discarded body parts at the hospital, Dr. West builds his creation and hides it in the basement crypt.
When Gloria, a special patient of Dan's dies, he agrees to build a perfect woman using some of her fresh body parts. Meanwhile, Dr. Hill, a victim of the Miskatonic massacre, plots to exact his bloody revenge and to put an end to the hellish world that West has created...
Actors:
Jeffrey Combs, Bruce Abbott, Claude Earl Jones, Fabiana Udenio, David Gale, Kathleen Kinmont, Mel Stewart, Irene Cagen, Michael Strasser, Mary Sheldon, Marge Turner, Johnny Legend, David Bynum, Noble Craig, Kim Parker, Charles Schneider, Rebeca Scott, Jay Evans, Fabian Alomar
Directors:
Brian Yuzna
Producers:
Brian Yuzna
Writers:
Rick Fry, Woody Keith
Studio:
Tartan
Genres:
Classics, Horror, Sci-Fi & Fantasy

Reviews (1) of Bride of Re-Animator

The success of the gleefully gruesome "Reanimator" meant there was inevitably going to be a sequel. After all, director/producer Brian Yuzna has been known to somehow cobble together two full-length feature films out of an H. P. Lovecraft story three pages long. And, like so many sequels, especially obscure horror sequels, it exists purely to squeeze whatever juice remains out of a concept good enough for one movie. In other words, like nearly all of Yuzna's many bargain-bin HPL adaptations, it isn't very good (the good ones are the first "Reanimator" and the lesser-known but far better "Dagon").

After a brief prologue in South America which has almost nothing to do with the rest of the film - it looks very much as though they started shooting a script set in exotic foreign parts before they realized the budget wouldn't run to it - our two heroes are somehow back in the same jobs at the same hospital where a few months previously they caused a zombie bloodbath, and merrily getting up to more of the same.

Unfortunately zombie special effects cost money, so for most of the running time we see very little of the creatures that are supposed to be the main attraction. Instead, Jeffrey Combs overacts monotonously as the mad scientist who causes all the trouble, Bruce Abbott is equally one-note as the character you're meant to like because he has what was considered good hair in the seventies, and everyone else is just plain dreadful. None of the cast will be familiar faces unless you've seen a lot of Brian Yuzna's movies, and the nearest they have to a famous name is Claude Earl Jones, who, judging by his acting, must have been cast in the hope people would confuse him with James Earl Jones (presumably no relation, since Claude is white).

The tone is more comedic than the first film, complete with annoying "this bit's funny" music, and the more ambitiously weird the monsters are, the less screen-time they get, which, given some of the not-so-special effects, is just as well. The full horrors of Dr. West's experiments only come to light at the very end, and are almost immediately destroyed so that we don't get a proper chance to notice how low-budget they are, but even the cheaper bog-standard zombies we do get a good look at stumble around groaning and gurning for a very long time without accomplishing all that much. And whose brilliant idea was it to base a large part of the script on "The Bride of Frankenstein", thus drawing our attention to a very good film in the middle of a very bad one?

On the plus side, it's amusing enough during the small portion of its running time when it really gets going, so it'll just about cut the mustard if you enjoy watching horror films which don't take themselves seriously because nobody's under any illusions that they're making a work of art, or even a halfway good movie. Of course, it'll help if you don't mind those grainy video-to-DVD transfers cropped to fit a TV screen typical of third-rate horror films like this one. Ah well, at least it's better than the second sequel...