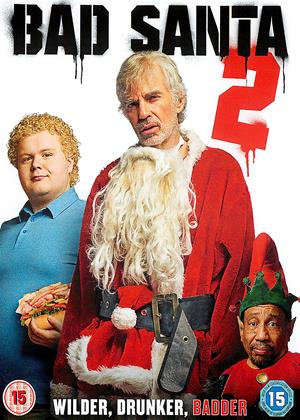 It's refreshing to see a non p.c. film & also one that isn't c.g.I. rubbish .The 5 main actors are all good & if you take it for what it is I thought it was consistently funny all the way through & had a strong script . Sure ,it is a bit over the top but the bottom line for me is that I found it amusing & entertaining.

This is a pretty awful follow up to Bad Santa, which I enjoyed. Bad Santa 2 takes the jokes to another (lower) level, the language is (unnecessarily) coarser and the 'family' angle to the plot is tiresome.

Too much bad language - Bad Santa 2 review by CS

I don't mind a bit of bad language but this is excessive - worse than the notorious Beverley Hills Cop. It is very un-PC which I don't mind but it isn't funny. Gave up on it after half an hour.

not for me - Bad Santa 2 review by LJ

If you have seen the first Bad Santa you know exactly what to expect .

All the same main cast ,which is really nice to see after soo long, with the addition of the Fantastic Kathy Bates .

The creepy yet sweet Thurman Murman was delightfully creepy again . and brought a tear to the eye at the right moments.

Santa was very BAD , which is good , and also deeply Good which was also good. Great Fun was had by all.

A Great Seasonal Movie. worth seeing each Christmas .

Too vulgar for me and only a few little laughs.My husband seemed to like it but didn't laugh much.Thinks he likes vulgar things lol

Bad Santa 2 is less a sequel overdue than it is an aimless production past its expiration date. The jokes have become spoiled with age. The characters have become pale imitators of their former glory. And the callbacks to the past film become bitter hangovers, leaving me questioning if the first film was ever all that good.

To be sure, I went back to watch the 2003’s Bad Santa to see how well the movie has aged. It thankfully holds up; Billy Bob Thornton had a remarkable wit as the foul-mouthed drunk Willie, Tony Cox was a pint-sized powder keg of the frequently frustrated Marcus and Brett Kelly plays the doltish boy Thurman so well I couldn’t help but admire his misguided trust. There are funny lines, funny scenes and this indescribable sense of off-color vulgarity that makes the film as hilariously subversive as it is savagely dark.

But this sequel returns to these characters over a decade later in a script that struggles to find something for them to do. Willie is out of prison and goes back to his bad habits of pissing all his money away on booze, later expelling it in a back alley. So, of course, he requires another heist. Marcus returns, also recently released from prison, to inform him he has a new safe-cracking job at a charity requiring multiple Santas. Also in on the scheme is Willie’s mother Sonnie (Kathy Bates), speaking with the same vulgarity of Willie and embodying the same deceptive nature of Marcus. They become the hateful trio on a heist that involves them beating up Santas, spying through vents, cursing in front of kids, having sex with multiple people from the charity and keeping their guns ready to betray one another at the climax.

Yeah, this is all pretty par for the course and adheres closely to the spirit of the last film, but the heart and spirit just isn’t there. Perhaps it’s because Thurman, the moral epicenter of the last film’s dark farce, is mostly kicked to the curb. While Willie, Marcus and Sonnie go about their scheme, poor Thurman is forgotten about and never plays much of a role until the end of the picture when Willie becomes entranced by the grown-up boy’s singing voice. As much as I wanted to love Thurman once more as the pudgy and curly-haired angel among thieves, it’s hard to do so when most of his comedy comes off as familiar retreads. Remember how much the boy liked to make sandwiches? Now he works at a sandwich shop, constantly offers sandwiches and even acts as a highly critical commentator on sandwich-making television programs. I’m genuinely surprised the movie didn’t go fully overboard with this concept by having Thurman block a bullet with a sandwich in his breast pocket.

This is a picture that wants to wallow in the nostalgia of the previous film, but doesn’t have enough charisma or ideas to push these gags in a new direction. There are more women to screw (Christina Hendricks, Jenny Zigrino), but they are even more bereft of personality than those of the previous picture, even for Octavia Spencer returning as a prostitute. There’s the obligatory scene where Willie must play Santa and have kids sit on his lap, some making outrageous demands while others urinate on him. One kids rattles off a list of video game titles he wants for Christmas and Willie admits he doesn’t understand a word of his request; “You could be speaking’ f**king Swahili right now.” Not a terrible joke, but a joke that could have been made back in 2003 as well, appearing more as a leftover bit from the first script.

The sad truth is that Bad Santa 2 has lost the edge that made it such a pleasing bit of counter-programming to sugary and commercialized Christmas pictures. The original was hilarious for trying to out-gross, out-cuss, out-disgust and out-offend more than any other Christmas comedy and succeeded with flying colors. This sequel attempts to outperform itself and fails miserably, shirking whatever shred of meager morality it may have had before. All you need to do is look at the endings. Bad Santa ends with Willie accepting his prison sentence and Thurman learning to stand up for himself. Bad Santa 2 ends with Willie placing his testicles on Marcus’ face. The Bad of the title is now more fitting.