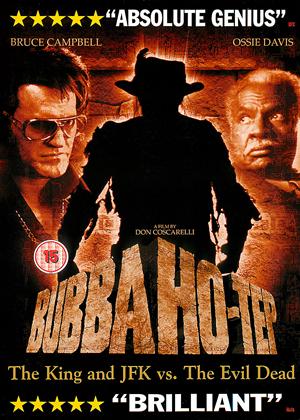 Synopsis:
In the Shady Rest Retirement Home. Mud Creek, Texas, something very strange is going on. None other than the King of Rock 'n' Roll himself, Elvis Presley, is growing old in the company of John F- Kennedy. Contrary to news reports, JFK dodged the assassin's bullet and in the aftermath had his skin dyed black and his brains swapped by Them' at the White House. And that's not all. According to the former president, there's a malevolent mummy on the loose in the home and he's devouring the residents' souls one by one. It's time, says JFK, to kick some mummy ass! And so, armed with a zimmer frame, a wheelchair and makeshift flame-thrower, the decrepit duo set about taking care of business...
Actors:
Bruce Campbell, Ossie Davis, Ella Joyce, Heidi Marnhout, Bob Ivy, Edith Jefferson, Larry Pennell, Reggie Bannister, Daniel Roebuck, Daniel Schweiger, Harrison Young, Linda Flammer, Cean Okada, Solange Morand, Karen Placencia, Bruce Rawitz, Joseph Primero, Chuck Williams, Timothy E. Goodwin, James Maley
Directors:
Don Coscarelli
Narrated By:
André Sogliuzzo
Writers:
Joe R. Lansdale, Don Coscarelli
Studio:
High Fliers
Genres:
Comedy, Horror

On paper the plot of 'Bubba Ho-Tep' has to be one of the most bizarre storylines of all time. Elvis Presley did not die in 1977; tired of fame he secretly traded places with an Elvis impersonator named Sebastian Haff, and while the impersonator died in 1977, the real Elvis is now a geriatric 68 year old living in a run down Texas retirement home called 'Shady Rest'. His glory days are behind him, and whenever he claims to be the real Elvis Presley everyone just laughs at who they think is just a crazy old Elvis impersonator obviously going senile in his old age. Tired and depressed he spends his time lying in bed reflecting on his career and contemplating if he made the right choices in life. When he discovers an 4000 year old Egyptian mummy is inhabiting a small shed within the grounds of the retirement home and is coming out at night to feast on the souls of the elderly residents, he teams up to defeat the mummy with an old black man claiming to be John F. Kennedy, who says the government covered up the JFK assassination by dyeing him black, putting a bag of sand in his head, and dumping him in a retirement home. As weird as the plot sounds, 'Bubba Ho-Tep' is an absolute gem. The dialogue is witty, razor sharp and very funny, especially scenes where Elvis and JFK mull over the possible meanings of some hieroglyphic graffiti scrawled on a bathroom wall by the mummy. At the end of the day, how can anyone not love a film which features an aged Elvis battling a 4000 year old mummy with a zimmer frame?!!

The King is NOT Dead! - Bubba Ho-Tep review by Count Otto Black

Never mind "Phantasm" - this is the best film Don Coscarelli ever made, and probably the best film he'll ever make. It's also by far the best performance you'll ever see from Bruce Campbell. What sets it apart from most horror films is its humanity. Two aged and infirm men in a seedy retirement home find a belated new purpose in life defending its residents from a supernatural threat which they are hopelessly ill-equipped to cope with, but which, since they're already suspected of being senile and delusional, they can't tell anyone else about. The mummy they're up against is actually rather inept - why else would it be reduced to sucking what life remains out of a bunch of geriatrics? - but the two men who take it on have trouble standing up, let alone fighting undead monsters!

And yet, despite usually being categorised as a wacky comedy, this film really is full of heart. The hero, "Elvis Presley", is probably the real Elvis, though there's just enough doubt about that to make you wonder if he's the delusional old man everybody thinks he is, while still having complete sympathy with him, and genuinely caring about his heroic efforts to do the right thing in a totally bizarre and almost impossible situation. As for his best friend "JFK", he's heavily implied to be truly delusional - after all, JFK wasn't black - with just enough uncertainty for him to possibly be JFK after all, yet even though he's portrayed as both crazier and more physically disabled than "Elvis", he too is consistently shown to be a noble, likable, and tremendously brave man who tries to fight the good fight even though he has almost zero chance of winning a fight with anything more muscular than a daddy-long-legs.

Something far too many makers of horror movies forget is that you really ought to care about the heroes, otherwise the film has no meaning. Like Spinal Tap, these two mummy-hunters are both ridiculous and useless, yet you genuinely do care about them and want them to triumph. They are good men who aren't terribly good at what they're trying to do, but they do it anyway because nobody else will. And at absolutely no point in the entire movie are you expected to automatically like somebody just because they're physically attractive (quite the opposite, in fact). This isn't a perfect film by any means, but it's so far ahead of just about everything in the horror genre in so many ways that I'm giving it full marks anyway. If there were more horror movies like this, horror movies wouldn't be a joke. And if there were more intentionally funny horror movies like this, they wouldn't be a bad joke.

As the above reviews state, crazy film but eminently watchable, unfortunately, the disc I got started breaking up and pixillating right at the grand finale, not bad enough to miss the final showdown but enough to be annoying, I tried the disc in another machine and the problem was still there.

A completely bonkers and bizarre storyline that is almost tarentino-esque in its style and dark comedy.

Something different and certainly worth a watch.