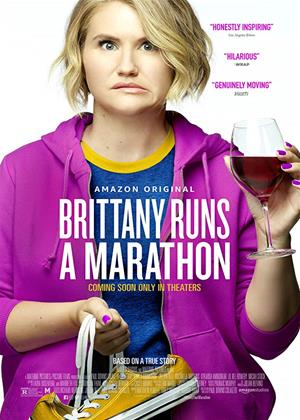 Synopsis:
Hilarious, outgoing and always up for a good time, New Yorker Brittany Forgler (Jillian Bell) is everybody’s best friend - except maybe her own. At 27, her hard-partying ways, chronic underemployment and toxic relationships are catching up with her. But when she stops by a new doctor’s office to try to score some Adderall, she gets slapped with a prescription she never wanted: Get healthy. Too broke for a gym and too proud to ask for help, Brit is at a loss, until her seemingly together neighbor Catherine pushes her to lace up her Converse sneakers and run one sweaty block. The next day, she runs two.
And soon, after finishing her first mile, she sets an almost unthinkable goal: running in the New York City Marathon.
Actors:
Jillian Bell, Jennifer Dundas, Patch Darragh, Alice Lee, Erica Hernandez, Max Pava, Michaela Watkins, Adam Sietz, Dan Bittner, Mikey Day, Lil Rel Howery, Kate Arrington, Beth Malone, Micah Stock, Esteban Benito, Nadia Quinn, Utkarsh Ambudkar, Juri Henley-Cohn, Peter Vack, Pascal Yen-Pfister
Directors:
Paul Downs Colaizzo
Genres:
Comedy, Drama
Awards:

Reviews of Brittany Runs a Marathon

In a smaller film, Brittany Runs a Marathon would have a somewhat tunnel vision goal of one woman trying to better herself in preparation for a major running event. Stirring stuff but there are plenty of inspiring sports movies, though perhaps not as many to such a perspective. But this is what makes the film all the more engaging from this personal angle that takes a sharper angle at trying to change yourself and fix what’s wrong with your life, be it your weight or your relationships.

For the 28-year-old Brittany Forgler (Jillian Bell), it’s a little of both. Though exceptionally quirky and the friend who always seems to have the right joke when times are tough, her doctor, unfortunately, has to give her the bad news about her health. Her weight has become a real crisis and she needs to do something about it. The signs of how this happened are apparent not just in her diet but how she acts at social events, often feeling left out and hiding within a bottle. Her roommate as a social media influencer doesn’t help not merely from her presence but from what she represents about the direction in life.

And so Brittany decides to take the initiative and reinvent herself. She goes on a strict diet to curb her weight and starts running every day. This is not easy, obviously, but made especially hard in New York City. Running in the city is not easy with so many people on the street. Holding a diet is equally as tough when everyone her age seems to be partying. Still, she tries, even when pressured with birthday parties and friends who really need a night out with a drink to unwind. As a result, relationships suffer. When the faults of her friends become more apparent, someone as bitter as Brittany may be pushed just far enough to be the brutal voice of honesty. Not a desirable position but has been the mildest friend of some jokes, it’s easy enough to see where this side of Brittany comes about.

Intrigued to bend rules, Brittany befriends Jern (Utkarsh Ambudkar) and they hit it off pretty well for essentially bonding over squatting. What makes their chemistry work is that they seem to be at odds with their differences, considering Jern is very open about his sexual attraction to cartoons. He’s weird but honest and open, willing to help Brittany redefine her dating profile as another step in reimagining herself.

Though the marathon climax is certainly exciting and comes with its own share of drama and triumph, it’s the build to that goal that makes this film all the more compelling. It’s inspirational not just for the marathon but the road to it that finds Brittany redefining herself beyond just her health and physical appearance. Brittany could easily just run the marathon and then fall back on her old lifestyle of hard-drinking and poor life choices. But she braves it with all the harsh social changes that come with it, balancing how much is worth this changing in her life and deciding what needs to be pruned. The marathon itself is more arbitrary than the road towards it.

Brittany Runs a Marathon certainly surprised me as a thoughtful and charming picture that never pulls its punches for what could’ve been an easy bit of a late-20s melodrama. There’s certainly plenty of those to go around but so few carry a personal and emotional edge as relatable and striking as this picture. Director/writer Paul Downs Colaizzo certainly turns in a stellar directorial debut as a biting bit of drama that has enough strength to carry it through to the finish line..