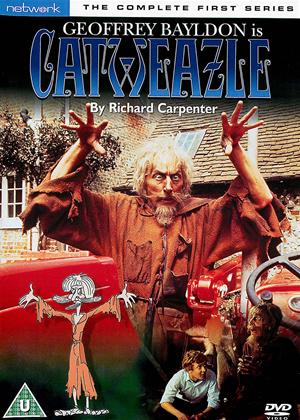 Synopsis:
It's thirty-five years since 'Catweazle' arrested the boredom of Sunday afternoons to become a television legend? Now for the first time ever, 'Catweazle' returns to enchant a new generation with his unique brand of magical comedy. Filled with humour, warmth and charm, 'Catweazle' captured the imagination of children everywhere, with Richard Carpenter's wondrous story of a bumbling magician and his pet toad, trapped nine hundred years ahead of their own time. Unforgettable for Geoffrey Bayldon's outstanding performance as Catweazle, the series also boasted a superb regular cast comprising Charles Tingwell (Mr.
Bennet), Robin Davies (Carrot), and Neil McCarthy (Sam), while guest appearances by some of Britain's finest actors of the period ensured the quality status of the production. Catweazle is a magical dip into the past for those who saw the series originally, and a special treat for everyone who will experience this classic for the first time.

1. The Sun in a Bottle
Deep in the heart of the English countryside, eleventh century magician Catweazle finds himself cornered by Norman soldiers. Calling upon his dubious magical powers, Catweazle leaps into a lake to escape his pursuers, but inadvertently ends up travelling nine hundred years through time and into the twentieth century.
2. Castle Saburac
Seeing that Catweazle has taken refuge in a chicken hut. Carrot offers him a long overdue bath. The Bennet's cleaner is not impressed, although magic comes to the rescue, as does a new abode for Catweazle, Castle Saburac.
3. The Curse of Rapkyn
Continual misfortune and bad luck lead Carrot to believe there is a curse on Hexwood Farm. A chance encounter at a local history museum leads Catweazle to a magic book, and an even greater discovery.
4. The Witching Hour
Parish councillor Miss Bonnington worries Carrot, especially as she appears to have her eyes firmly set on his father. Carrot decides that only magic will spirit her away, and who better than Catweazle to provide the spell.
5. The Eye of Time
Sam has little luck with his weekly flutter on the horses. Busy at the farm, Sam asks Carrot if he can place his bets for him. Catweazle is dragged in to help, and ends up having an audience with the mysterious Madame Rosa.
6. The Magic Face
An American photographer takes a picture of Catweazle at an old cottage. Eager for Catweazle to pose for more shots, she asks Carrot to bring him over to her house. Catweazle reluctantly agrees, convinced he's under her spell.
7. The Telling Bone
Catweazle's calamitous magical powers have landed him on the spire of a local church. Catweazle is encouraged to come down by the vicar trying to offer assistance, but very soon it is the clergyman who is in need of help.
8. The Power of Adamcos
Catweazle sees Norman soldiers and thinks he's returned to his own time. In the confusion, he loses his sacred knife Adamcos. The trail leads to an antique shop, where Catweazle is desperate to retrieve his magical dagger.
9. The Demi Devil
A visit from a missing pet equals chaos for Catweazle who thinks he's turned Carrot into a monkey. In desperation, Catweazle pays a visit to the eccentric Colonel Upshaw in the hope he'll be able to reverse the magic.
10. The House of the Sorcerer
Sparks fly when Sam tells Mr Bennet he is leaving for a new job with Cyril Fitton, an ornithologist based in the local woods. Catweazle stumbles across the bird watcher's caravan and is temporarily employed as an assistant.
11. The Flying Broomsticks
Scores of broomsticks have been disappearing from the area, prompting the local Police to quiz Sam. Naturally Catweazle is behind the thefts, convinced that the brooms hold the power to return him to his own time.
12. The Wisdom of Solomon
Mr. Bennet employs a new housekeeper, Mrs. Skinner, who arrives with her obnoxious son Arthur. Soon, both are upsetting the atmosphere at the farm. Catweazle is called upon to provide the necessary magic to remove the pair.
13. The Trickery Lantern
Aware that the way back to his own time lies through water, Catweazle prepares for the long journey home. Seeking protection from the Normans, Catweazle steals a spot-lamp that Carrot has bought for his father's birthday.
Actors:
Geoffrey Bayldon, Robin Davies, Charles 'Bud' Tingwell, Neil McCarthy, Derek Baker, Steve Emerson, Dave Griffiths, Frank Henson, Terence Mountain, Chris Webb, Marjie Lawrence, Peter Sallis, Anne Jameson, Kim Butcher, Sandra Greene, Gary Rich, Carmel Cryan, June Jago, Ruth Kettlewell, Ursula Smith
Directors:
Quentin Lawrence
Producers:
Quentin Lawrence
Creators:
Richard Carpenter
Writers:
Richard Carpenter
Studio:
Network
Genres:
British TV, TV Action & Adventure, TV Classics, TV Comedies, TV Dramas, TV Sci-Fi & Fantasy
Countries:
UK

Sign up
The Flipside of Dominick Hide / Another Flip for Dominick