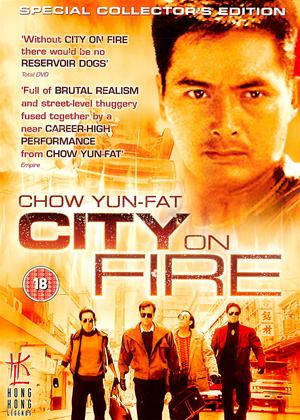 Reviews (1) of City on Fire

This is the legendary Hong Kong action movie that was very selectively ripped off by an unknown first-time director when he was writing his low-budget debut feature, a funny little film called "Reservoir Dogs"; and the rest is history. The trouble is, just like Quentin Tarentino, "City On Fire" is greatly overrated. A couple of years after it was made, John Woo also pinched quite a few of the plot elements, including the casting of both male leads, and recombined them in "The Killer", causing Hollywood to take the kind of interest in Woo they never took in Ringo Lam. And there's a very good reason for that.

As cities on fire go, this is not a particularly large conflagration. It opens with a savage murder and a brutal robbery, and closes with the bloodbath where most of the characters end up dead that it was inevitably going to, but in between, there's a very, very long middle section about angst, trust issues, male bonding, and other things that don't strictly qualify as "action", including tedious byplay between our conflicted hero, his whiny girlfriend, both of whom have a mental age of 12, and her best friend, who behaves as if she's a major character despite serving no purpose whatsoever - presumably her love-triangle subplot ended up on the cutting-room floor.

Gritty realism is sometimes a good thing, and sometimes not. Ringo Lam is no Martin Scorcese, and "City On Fire" is no "Mean Streets", however badly it wants to be. Chow Yun-Fat is certainly no Robert DeNiro; in fact, he's not a very good actor at all, constantly pulling his trademark sneering grimace to indicate any strong emotion, in the same way the almost equally talented Antonio Banderas shows us he's extremely angry/determined/badass/etc. by making his mouth perfectly circular. The realistic elements simply highlight how cardboard the characters are and how stylized their behavior is.

Absolutely nobody ever behaves like an adult - at one point the protagonist and his new best friend literally have a food-fight! And since the police force is basically a very strict boarding-school with an exceptionally nasty bully, it's no wonder our developmentally challenged hero bonds so quickly with a ragtag band of rascally scamps with whom he can raid the tuck-shop for a midnight feast and other wizard wheezes - oh, sorry, I mean rob jewelry shops with extreme violence and shoot people in the head.

This kind of material has to be played as over-the-top ultra-violent black comedy, something John Woo understands perfectly (or did before Hollywood sucked the talent out of him), and Ringo Lam doesn't. The characters are too flat to care about, their motivations are so contrived that they might as well have visible strings, and worst of all, it's an action movie which for most of its running time has no action. Watch "The Killer" instead to see how it's supposed to be done.