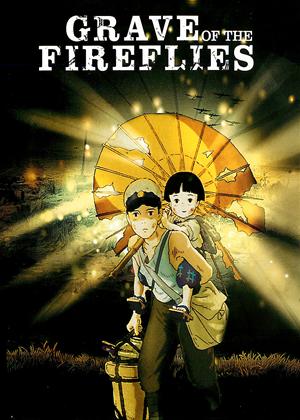 Synopsis:
Set in Japan during World War II, the film focuses on Seita and his little sister Setsuko. After their mother is killed in an air raid, and with their father serving in the navy, they are forced to fight for survival in the devastated Japanese countryside. Food and shelter are scarce, and even their own relatives are too concerned with their own survival. All they have is each other and their belief that life must carry on.
Directors:
Isao Takahata
Producers:
Toru Hara
Voiced By:
Tsutomu Tatsumi, Ayano Shiraishi, Akemi Yamaguchi, Yoshiko Shinohara, Shannon Conley, Crispin Freeman, Dan Green, Amy Jones, George Leaver, Corinne Orr, J. Robert Spencer, Nick Sullivan, Veronica Taylor
Writers:
Akiyuki Nosaka, Isao Takahata
Aka:
Hotaru no haka
Studio:
Optimum
Genres:
Anime & Animation
Countries:
Japan, Anime & Animation

Reviews (4) of Grave of the Fireflies

Beautiful but tragic - Grave of the Fireflies review by CP Customer

I know someone who bought this film for their kids. Good thing he watched it on his own first as Grave of Fireflies, despite being animated, is not a film for the little ones. It tells the story of a young boy, caught up in World War II, struggling to save himself and his little sister from starving to death in a village that is too busy with the bigger picture to see what is going on under their noses. Saddest film ever made.

Must-see but depressing Japanese animation set in wartime. - Grave of the Fireflies review by PV

One reviewer says this is not a film for 'the little ones'. I absolutely disagree - hiding bad things from children is silly. War exists and kids could and should watch this film (force feeding them pink fluffy fantasies of the world is wrong IMHO).

Anyway, this is a very depressing movie - all about Japan towards the end of World War II. It works not because of wonderful animation (which looks basic in parts) but because the characters are so well-drawn. It is utterly believable.

One thing that impressed me was the was the writer of the story was prepared to show Japanese people in wartime being horrible and nasty, even to their own people and families. It destroys the myths promoted by both East and West.

It's a sad film but that does not mean adults or children should avoid it. Quite the reverse, actually - people of all ages need educating about things like this because so many are so ignorant.

If you want gormless dumb fantasy cartoons to rot your brain there are plenty to choose from. This movie makes you think. Brave for the story to develop as it does - no Hollywood studio would ever allow such a thing due to that old obsession with a happy ending and heroics!

Good too that it has both subtitles AND dubbing into English if you want - the film is from 1988; the English version from 1998.

Marvellous animation spoilt by American dubbing. Is the subtitled version available in this country?

Collateral damage.. - Grave of the Fireflies review by CB

When countries go to war, the forces know what to expect, how to cope with traumas as best they can. The public of the country attacked don't have this resilience built-in, and their world is turned upside down, inside out and lives lost called collateral damage. This film is wonderful- capturing the foulness of wars and it's effect on joe public.

Rent it and shed a tear or three.