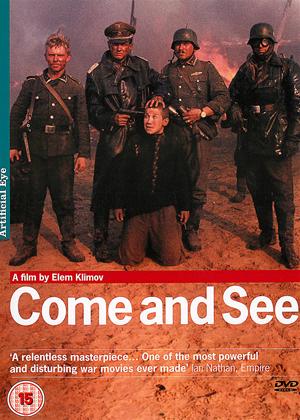 Reviews (9) of Come and See

Horrific, distressing, moving. One of the very best anti-war films I have seen - Come and See review by RP

It's in Russian, with subtitles. But don't let that put you off - this is a powerful, distressing anti-war film and if that's what you're looking for you'll find it in spades here.

It tells the story of a young boy joining the ill-equipped partisans fighting a futile resistance against the German army as it cuts a violent swathe through Byelorussia in the Second World War. Pursuing a brutal 'scorched earth' policy, the Germans put entire villages to the torch - including the inhabitants.

This is not a film for the squeamish. Although only rated 15 (there is limited on-screen explicit violence) this film has scenes that I found quite horrific and very moving.

One of the very best anti-war films I have seen. 5/5 stars.

No other film comes close for rendering the the horror of war on the screen. An overwhelming cinematic experience, though necessarily shocking and distressing.

Hugely powerful story of one young teenager and his passage through the horrors of war.

Packed to the brim with memorable images and facial close-ups that linger long after the scene has moved on. It seems that this was the pinnacle of Klimov's career as a director, but seeing this film makes me want to see more of his work.

Yes, this is about the Nazi ravaging of Belarus, but it is also a timeless and universal exposure of the barbarism of war.

Mel Gibson take note, this is how you make a visceral war movie. You don't need copious amounts of gore, dismembered limbs, and the like. What you should have are (i) a foreign land the Nazis treated like a plaything, its people considered less than human (ii) a ragtag bunch of resistance fighters that makes up for its lack of effectiveness with blind enthusiasm and machismo (iii) a family that exists to show the bleak cheapness of life during wartime (iv) the perspective of an adolescent, who over the course of the film and things he sees becomes a jaded and mentally shattered old man by its close. This is how you do it. The violence is more implied than explicit, but it's there, all seen from the point of view of Aleksey Kravchenko's young protagonist and his disbelieving glares straight into the camera lens.

If you ever go to Minsk in Belarus there is now a new museum dedicated to victims and information about the "Second World War" or more appropriately the "Great Patriotic War" as it is referred to by Belarussians and Russians. The population loss of Belarus alone, far far outweighing anything we experienced in Britain, is mind blowing as are the atrocities that were committed against the Belarusian people and their amazing heroism in defending their land. This film deserves all the praise it has received, documenting one aspect of the Nazi invasion of Belarus as seen from the eyes of an initially naïve but then overwhelmed teenager. As the film tells us at the end 628 Belarussian villages were burned by the Nazis with their occupants locked up inside. To me this film rates alongside Grave of the Fireflies as one of the most truthful, to the point, yet harrowing war films I have ever seen.

A Russian anti-war film - Come and See review by JG

We start peacefully with two boys digging in the sand at the site of a previous conflict looking for weapons and we build up from there. There is not a lot of blood and guts action fighting, as in many war films, but we build up to the horrors of a Nazi SS extermination of a Belarus village. At this point there is no distinction made between regular soldiers and SS, all Germans are depicted as depraved and debauched. In reality the Wehrmacht were ruthless but disciplined (in the main), although the film is depicting them as they would have been perceived by the villagers. Later as the tide turned and the perpetrators were captured and dealt with by the resistance fighters they were quickly dispatched and not made to suffer pain, which is not what would have happened. The fight up to the taking of Berlin was just as bad as the original invasion of Russia, but the film doesn't go there. Instead it asks how we could unwind all this horror. There are scenes of the holocaust and how Hitler rose to power, but that is not the only event in history that needs to be put right. There were wars for centuries before, and there have been wars since, with just as many atrocities taking place in the name of Nationalism. If you are pacifist you will see this as an anti war film. If you are a nationalist then you will see it as a justification for fighting to defeat evil, which is a shame. I can't think of a film that strikes at the real problem, Nationalism.

Vital viewing for adults. - Come and See review by SoniaGee

Although largely acted, you will believe all you see.

This shows how war is.

And you will be disgusted by how some people become inhuman.

My star rating is purely on this astonishing film-making

I'm a screenwriter who has just finished reviewing TERMINAL, a brilliant example of how terrible a film can be.

So I just had to come here and sing the praises of this masterpiece. I'll come back and give it a proper review later.

Up there with All Quiet on the Western Front as one of the greatest films to remind us of why we should not engage in war. The ending is memorable and I will never forget the spine tingling effect it had on me. Unmissable.