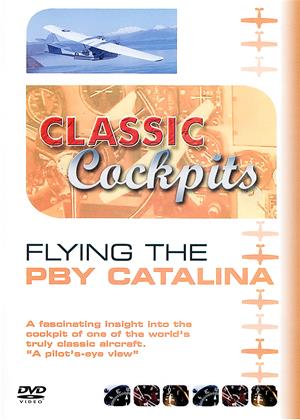 Synopsis:
Designed in 1935, the PBY-5 Catalina served with distinction in both the Atlantic and Pacific theatres, as long-range maritime patrol bomber and air-sea rescue aircraft. Catalinas also pioneered air routes over vast tracts of empty oceans, sometimes staying in the air, in complete radio silence, for more than 24 hours. After the war, Catalinas continued to serve as transport and water bombers. We join ZK-PBY en route to LakeTaupo, in New Zealand's North Island, for a training weekend. To preserve the hull from corrosion, the PBY-5A never lands on the sea and rarely in freshwater. Training Captain Brett Emeny takes us on a walk-around.
The hull shape, as well as the fittings and features, reflect the aircraft's dual roles of big speedboat and flying machine. The cabin interior is also unique: part boat, part aircraft. We now join Brett and other Catalina Club pilots in cockpit operations. Sound recorded directly from the Cat's intercom allows us to hear all cockpit conversations. Filmed also from a helicopter and a speedboat, the water landings are spectacular! ZK-PBY is a PBY-5A (A for amphibian) Catalina, built by Canadian Vickers, Montreal, Canada, in 1944. It served with No5 Squadron, Royal Canadian Air Force, operating from bases in Newfoundland, Quebec and Nova Scotia, before it was struck off charge in 1947. It then disappeared until 1955, when it was converted to civilian configuration and returned to the Canadian register as CF-JVC where it was operated by several owners, including Austin Airways, Canada's oldest airline. In 1988 it was refurbished for tourist flights down the Nile River carrying the registration Z-CAT, until October 1994 when Z-CAT left on its last epic journey, travelling through nine countries, covering almost 10,000 nautical miles, in 90 flying hours, over 13 days, to arrive in its new home, New Zealand.
Actors:
Brett Emeny
Producers:
Rick Searle
Narrated By:
Brett Emeny
Studio:
Beckmann Visual Publishing
Genres:
Documentary, Special Interest

Rent other films like Classic Cockpits: Flying the PBY Catalina

Sign up
German Destroyers of the Second World War: Part 1

Sign up
Military Aircraft of the 20th Century: Bombers

Sign up
British Tanks of the Second World War

Sign up
German Destroyers of the Second World War: Part 2

Sign up
German Destroyers of the Second World War: Part 3

Sign up
The Red Baron / German Aircraft of World War One

Sign up
Great Bombers of the Second World War

Sign up
Royal Navy at War in Colour: A Sailor's View

Sign up
Seaplanes and Flying Boats of the Royal Air Force

Sign up
The Official Story of the British Army

Sign up
History of the Royal Navy: The Sun Never Sets 1806-Present