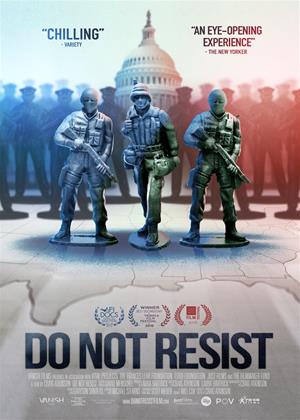 Synopsis:
Starting on the streets of Ferguson, Missouri, as the community grapples with the death of Michael Brown, "Do Not Resist" - the directorial debut of 'Detropia' cinematographer Craig Atkinson - offers a stunning look at the current state of policing in America and a glimpse into the future.
The Tribeca Film Festival winner for Best Documentary puts viewers in the center of the action - from a ride-along with a South Carolina SWAT team and inside a police training seminar that teaches the importance of "righteous violence" to the floor of a congressional hearing on the proliferation of military equipment in small-town police departments - before exploring where controversial new technologies including predictive policing algorithms could lead the field next.
Actors:
James Comey, Dave Grossman, Rand Paul
Directors:
Craig Atkinson
Genres:
Children & Family, Documentary, Special Interest

Reviews of Do Not Resist

Do Not Resist review by Mark McPherson - Cinema Paradiso

For the many protests and the militarization of the police in America, Do Not Resist exists more as a snapshot than a documentary. Depending on how we look back on such charged events, that may or may not work to its benefit. There is already a plethora of YouTube videos documenting the protests of Ferguson, the reaction to cops being found not guilty of killing suspects and the absurd armoring of police forces. Does Do Not Resist offer any new angle on this heated moment of history? There is some new content here that is worth viewing, but perhaps not as much as there should be for such a terrifying subject.

Director Craig Atkinson focuses mostly on the mounting efforts to increase the power of the police. We visit a city council meeting where the community voices their concerns about accepting a BearCat armored vehicle into their police force. It’s eventually voted for rather than against. An inquiry is held to ask how the police force keeps tracks of its weapons. They don’t. The inquiry asks why the police force requires bayonets in their arsenal. There is no definitive answer. Even a war veteran admits that there should be no need for bayonets in the police force. Bayonets are for war, not crowd control.

But those are all just meetings. What of the actual police for? What do they face during their everyday war on crime? The camera follows into a morning briefing where fear and courage is drummed up, referring to civilians as the enemy. No wonder the police force believe they need guns when they’re given such speeches as though they’re heading out into the streets of Iraq.

Training features a swat team using diversionary tactics on a home to distract the suspects inside that may take a shot at them. Later on, this technique is used when called into search for drugs at a low-income house. They’re successful in that no cops were harmed as they stormed the house and was able to arrest a felon for holding half a gram of weed in his book. I’m sure it was well worth breaking a window and then having to awkwardly explain to the house owner why they needed to do it. Similar investigations follow where police forces, armed to the teeth, raid more homes for drugs. There are a few moments when the filmmakers were asked to turn off the cameras when filming from a distance.

I think what’s most distressing about this footage is that while the opening briefing seems to ratchet up the fear, these boys seems fairly chipper about dashing onto the streets of crime. They smile and banter as they chatter between operations. I couldn’t help but think of war documentaries where soldiers would be having fun between missions, playing as though they could die tomorrow. Perhaps these cops do believe they will end up dead, as though the next corner will hold a drug dealer with a machine gun waiting to mow them all down. Rather than wait for that day, they’d rather have a bigger machine gun now. And a bayonet. And an armored car. Maybe a tank. Why not a drone?

Actually, they already have drones. The third act reserves footage of the latest in tech for not only tracking criminals with a drone, but also predicting the likeliness of a person to commit a crime. One law enforcement agent speaks of the future when they might be able to predict if a person is a criminal from birth. His innocuous response to such an idea is most frightening as though he feels nothing for such advancement in criminal technology, most likely reasoning that he’s just doing his job and shouldn’t question it.

As an observation of hyper-militarization of police, Do Not Resist is sufficiently telling and shocking, but it lacks that extra bit of perspective to tie the tone in with the events of Ferguson that led to this shift. We spend so much times with the cops with accompanying eerie horror music to ratchet up the fear. But we don’t spend much time with the protesters, listening to their stories and how they feel. We can speculate all day about what the people want, but it’s far more interesting to observe the relationship between the police force and the protesters. If the documentary found both perspectives, perhaps some sense of rising above the fear-mongering could help us understand the violent actions of both groups. I can’t exactly fault the film for taking its specific perspective, but there’s a much better movie that could have been extracted from such footage and far more meaningful than just an expose.