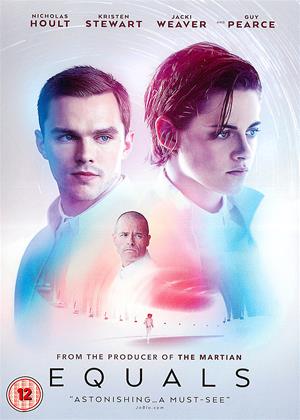 For a movie about standing out as an individual in a dystopian society, Equals falls in line with every movie of this sub-genre, creating an odd irony to its premise. It’s a society that’s been seen many times before. All interiors are sterile and white. All citizens are microchipped, devoid of emotion and have their whole lives planned by their government. All signs human contact and displays of emotion are quickly quelled by medicine and termination. But, wait, a few discover love and sex and desire to fight for more by escaping this society!

I’ve heard this story before, but rarely seen it portrayed with such detail. Unlike the modern dystopian societies, ripped from the pages of young adult novels, there’s a strong first act in establishing this innocuous world that is cold, but also somber and intelligent. Silas (Nicholas Hoult) fits into the fold as the illustrator of speculative non-fiction, within the confines of an open office environment. He plays by the rules of sleeping, eating and traveling on schedule. His bed comes out of the wall, as does his kitchen, with the mere push a big button that is clearly labeled. Citizens spend their evenings either watching rockets go deeper into space or solving computer puzzles. The only time he seems to absorb any knowledge is during the train ride into work where citizens can access terminals to read up on events and subjects. Topics approved by the government, of course.

But Silas lets his eyes linger when authorities take away those that have engaged in the forbidden act of touching. This desire to learn about feelings brings about a literal medical illness, which this society deems as cancer in various stages. If one becomes too human, you’re sent to The Pit. You can probably guess what that term refers to.

Co-workers treat Silas differently as they fear his emotion-cancer is contagious. His condition does attract the attention of his co-worker Nia (Kristen Stewart) who seems to be displaying signs of emotion as well. Watching each other from a distance and sharing conversations eventually lead to their secret affair of touching, leading to more touching. They know they cannot stay in a society that literally does not accept their love. Some sneaking around leads them to a resistance group that desire to escape the city. I suppose rural America is heaven in this world, as it is with all dystopian tales.

The production design on Equals is A-rate for being dystopian. There’s enough of this world fully defined and explored that it becomes engrossing enough to picture our own world. It’s a frightening paradise where drawing is professional enough to be an office job that pays, but should being an artist really be so 9-to-5? There’s a nervous disconnection where people fear to talk with one another or even have sex with one another. What purpose does any feeling have in a mechanical society?

If I go further, I’ll just be babbling the same themes and concepts of every dystopian movie out, which is exactly what Equals becomes after a while. After every neat aspect of this world is defined, its plot becomes a familiar and drab chase where Silas and Nia race to be with each other and escape the grip of the city. But the tension isn’t really there as this is a peaceful society where cops don’t use guns. Or do they? We never see what means of controlling criminals is present in this city as security forces simply walk you to The Pit. Perhaps humanity has evolved so far that criminals are not as likely to run or disobey, similar to the police force in Demolition Man. Unlike Demolition Man, however, there’s no stray criminal to tear down this society. Silas and Nia are more fervent objectors than rebels in love.

Equals entertains the fearful future, but does little to make it exciting. Even the passion between Nicholas Hoult and Kristen Stewart seems to reach a point of nihilism where they’re not sure if they love each other or just love the idea of loving each other. They’re not sure how to proceed; the story is not sure where to go and the production design just sits there to be admired. It is pretty enough sci-fi picture, but it’s all dolled up with fancy sets, great ideas and nowhere to go with any of it.