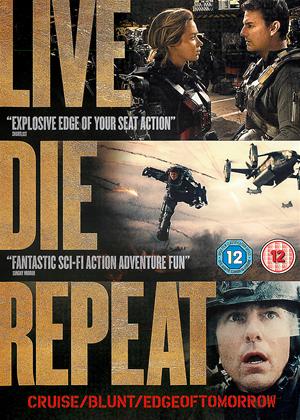 Reviews (5) of Edge of Tomorrow

Incredibly good fun with Tom Cruise on top form. Plenty of action and humour and certainly well worth a rental.

Really enjoyed this film from start to finish. Good original story with some laughs and good action scenes. Arrived quickly as soon as it was released. Tom on top form.

The plot has been pretty well covered in the cover "live, die, repeat" and the other reviewer's mention of Groundhog Day. This plot line has not been over-explored in my opinion and does well for the Cruise treatment. Some reviewers are not predisposed to Cruise. If you are not, don't get this film. He is in every minute of it. I think Mission Impossible is a fantastic series and saw every one. The fighting suits that the soldiers wear are great, like small transformers. Some of the acting is a bit limp but I hardly noticed. Good fun film.

It's an alien invasion. Only Tom Cruise can save the world! - Edge of Tomorrow review by RP

It's an alien invasion. Only Tom Cruise can save the world. Err, that's it.

But this one is much better than many other 'alien invasion' sci-fi action films. Tom Cruise isn't one of my favourite actors. The roles he chooses are often too goody-goody, too good looking, too straight. And here's yet another one, in which he plays a US Major who is killed on the battlefield while fighting aliens, only to live the day again in a sort of 'Groundhog Day' time loop until he becomes expert in fighting the aliens. He teams up with Brit actress Emily Blunt who plays another alien fighting expert and together they take the fight to the big boss alien...

The acting is so-so, Emily Blunt doesn't convince me as a soldier - but the effects are quite good and the film is laced throughout by much humour. And it's the humour that carries the film.

The film was made in Britain and the action is set in Europe; for a US produced film it's quite unusual for the focus to be Europe and for Paris and London to be the invaded cities rather than New York, so it's worth an extra star for that.

It is very derivative but the clichés all seem to be there for added humour. I enjoyed it despite the fact that it's yet another Tom Cruise vehicle, so I'll give it 4/5 stars.

Great movie,the time manipulation is actually understandable which makes a change.A surprising number of very funny scenes and lots of battlefield chaos as the two main characters try to outsmart the aliens at their own game.

We all remember the films Tom Cruise did in the noughties, the science fiction pictures that he put his heart and soul into while working with Steven Spielberg and while he returned to the genre for Oblivion last year it wasn’t quite the same. I’m pleased to announce however that Edge of Tomorrow is a cut above the rest, a charming sci-fi picture that has hints of romance, comedy and all the good stuff you’d expect from a film that takes some of its cues from Groundhog Day.

Edge of Tomorrow follows Bill Cage (Cruise), a soldier whose sole job was selling a global army and recruiting soldiers. However when he finds himself heading into his first battle with a group of soldiers who have no interest in helping him survive he thinks he is doomed. However when he does die on the battlefield he wakes up the day before to find he is living the same day over and over again. With the help of Rita (Emily Blunt), a highly skilled soldier he starts to find a way to turn the tide in a war against an alien threat as he struggles to make things right and stop living the same day over and over again.

Much like Groundhog Day, Edge of Tomorrow is a cut above the rest, it’s smart, well acted and wonderfully creative with visuals that remind you of the best parts of Saving Private Ryan and The Matrix. Not only that but the film takes advantage of the films premise to create a thoroughly believable and emotional character arc for Cage while he learns to be the soldier nobody thought he could be. The film uses the time sensitive story to tell a very human and oddly real tale of overcoming cowardice and making an emotional connection.

Director Doug Liman’s grasp of the action is terrific with the films monsters, called Mimics, being exceptionally well realised while still maintaining a sense of mystery to them. However the film relies on Cruise and Blunt to guide viewers through the complicated plot and they do one hell of a job of making the story and their characters pop with Blunt reinventing the modern idea of the female action hero as she butchers aliens with an enormous sword. If anything the two have improved tremendously on their last Sci-Fi outings (Oblivion and Looper respectively) and Edge of Tomorrow will go down as one of the best films this year.