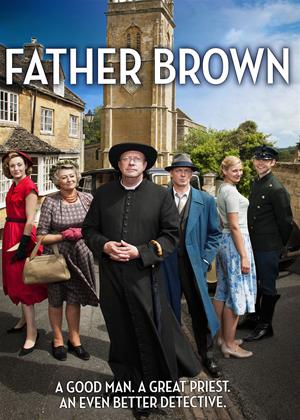 Father Brown is the kinda cozy murder mystery series that treads lightly enough to never be as controversial as its 1950s setting with a priest protagonist. It taps around issues of the era that play into the many murders of the many seasons but never swings its gavel firmly on its stances. On a more racial, sexual, religious, and legality level, there are certainly problematic levels, but consider the purpose of this series to be little more than a nostalgic staging of murders for cute old people to solve.

Father Brown makes this innocence clear by the titular character, played by the pleasantly comforting Mark Williams, being such a sweet soul. He approaches his small-town problems with all the love and understanding that comes with his priesthood, trying to put the best foot forward to make the world a better place. His wide-eyed wonderment comes across with the same warmth as Jessica Fletcher of Murder She Wrote, always trying to find the good in people while still being suspicious of intent. Where Brown makes himself more pronounced is in how he stammers and prods his way through the cases, sometimes leading to brash efforts to save the day. All is forgiven, of course. No mystery solver is without sin, even when a priest at the helm.

Brown is joined by a host of other colorful characters that make the 1950s town come alive. Sorcha Cusack plays the Irish parish secretary Mrs. Bridgette McCarthy, the woman willing to come to the aid of Father Brown, despite her gossip tendencies that more stir the pot than cool it. Nancy Carroll fills in as the rival of McCarthy by the name of Lady Montague, a socialite who apparently has nothing better to do with her time than cause trouble. Alex Price does a dapper job as the recluse Sid who sometimes takes an honest job and sometimes digs up his criminal expertise to solve a murder. And there are a host of different inspectors who come into the story to bumble the case and begrudgingly rely on Father Brown’s help. They’re soon warmed-over though. How could they not?

Father Brown taps into some interesting territory with the villains bringing blood and terror to the town, but always does so with a certain gentleness that may not seem wholly genuine but always keeps goal-focused. One can’t expect a show such as this to delve into elements of the Satanic panic and sexual questioning with profound grace, but the writing strives to narrowly avoid pits of insincerity to bring more understanding than Catholic clashing.

But, wow, the shooting locations of numerously gorgeous locations really hammers home the wholesomeness this show is aiming for it. It just oozes ease of the old and quaint with its lush greenery and immaculate architecture. Mostly filming in the Gloucestershire village of Blockley, there’s an atmosphere to the setting that just eases the audience in with a manner that doesn’t seem as present from most modern murder mysteries, even those aiming for a cozy demeanor.

The show certainly has its faults but no more than your average cozy murder mystery which keeps changing things up to keep the seasons going. There are hills and valleys within its quality and there are no doubt debaters of who made the better inspector akin to the Doctor of Doctor Who. But there’s a certain refinement that is just so intoxicating to such a series I can’t help but fall for its charms.