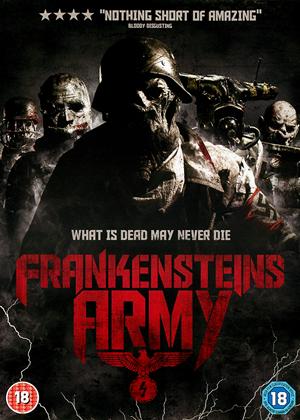 A found footage-style film from the Second World War is not something I would have been expecting to take seriously, due mainly to the highly improbable nature of ‘home movies’ being shot with cameras from the 1940’s. Indeed, there is a certain tongue-in-cheek style to proceedings as if the producers are urging us to go along with a story they clearly believe is worth telling, however unlikely the circumstances.

With a few blemishes on the recordings to at least remind us the footage has apparently been lost for 70 years, we meet a group of Russian soldiers answering a fuzzy distress call from deep in the misty German countryside. The transition from the unforgiving, snow-flecked terrain and the underground bunker they discover, with its spitting electric cables and an adornment of torsos with weaponry grafted into their flesh is very evocative and succeeds in drawing the viewer in to this hidden world.

When the monsters emerge (‘sewing dead people together’), they are very impressive. There is very little CGI here, but physical, constructed monstrosities (many created by Richard Raaphorst for his previous, aborted ‘Worst Case Scenario’ film).

While the creations are wonderful, the human characters fare less well. Their dialogue soon becomes a hysteric mass of shrieking and cursing (understandable, given the circumstances) and it’s difficult to know (or care) who is who – which is fine: this is a monster show, and these people are largely fodder. When the soon discovered Victor Frankenstein turns out to be just another shrieker and curser, the interest begins to wane. He’s clearly insane, but just as two-dimensional as his (human) co-stars.

Found footage films like Paranormal Activity and The Devil Inside are starting to get a little stale so Hollywood has come up with a plan to counteract the aging of this fad by moving the action to a different time from the futuristic Europa Report or the past, like they have done so with Frankenstein’s Army, a tragic attempt at originality that makes light of a serious moment in history.

Set during the Russian advance through Germany towards the end of the 2nd world war, Frankenstein’s Army follows a team of soviet soldiers sent to obtain the doctor and his research from a strange abandoned town in the middle of nowhere. What they don’t expect is a collection of monstrous creatures that used to be men that are intent on killing each and every one of them in the name of the twisted Dr Frankenstein.

The film spends a significant portion of time establishing its characters before throwing them to the wolves but almost everything you think you know about these characters gets flipped on its head halfway through the film, effectively making the films opening pointless except for the fact it gets the squad from A to B.

By the time the group arrives at the village the film has used up all its surprises and what follows is a linear series of scares that couldn’t strike fear into the heart of even the smallest of children. The film tries to compensate by trying to make its characters as despicable as possible as to make some sort of comment about the effects of war on a man's psyche but it doesn’t land because when you see a grown man beat a woman within an inch of her life you don’t really wonder why he’s doing it.

Ultimately it’s a horrifyingly bad picture that forces its actors to do brutal things for the sake of this so called art.