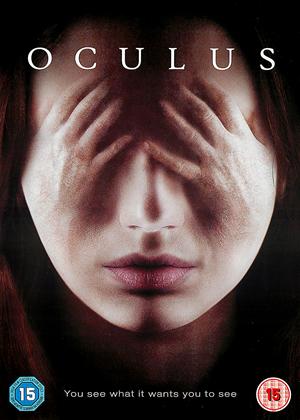 Still not sure what this was about, and a poor ending didn't resolve anything. I was very puzzled as to why the female character would subject her (recently released from a mental institution) brother to any more frights if she cared about him as much as she seemed to. Wouldn't recommend.

If you enjoy an atmosphere of endless apprehension and jump chill moments, you won't be disappointed but if you want a satisfying whole then you might want to look elsewhere (such as The Conjuring series that give a satisfying whole narrative)

Oculus's narrative setup is wonderfully ambiguous. Are our sibling pair protagonists psychotic or are they really experiencing the malicious supernatural and the performances make this very engaging.

But in the end I hate the movie and look forward to getting this out of my head by watching more satisfying films. But that is my personal reaction because I appreciate that this film is a technically well made movie. I don't regret watching it, though. I am a supernatural junkie, anyway. But I just don't want this in my head anymore.

I can't go in details obviously, otherwise there would be no point in you watching it! Rent it and make your own mind up. you might love it, or you might hate it but at least you can decide for yourself.

Beautiful Scottish red-head Karen Gillian has spent the last two years working hard to ensure that she is remembered for more than her role as the Doctor’s companion, an interesting role in the massive MCU film Guardians of the Galaxy helped shoot her into the mainstream whilst a couple of well-chosen TV series and shorts are helping to further prove her acting talent; her choice to appear in Mike Flanagan’s dark psychological horror Oculus has only further cemented her status as a rising star of international cinema.

Telling the story of the Lessar Glass, a cursed mirror that has been murdering and driving people insane for almost four hundred years Oculus splits it’s narrative over two time periods, 2002 when the latest owner of the mirror, the Russell family, find themselves tortured into madness by unseen forces and 2013 when the now grown up Russell siblings construct a plan to destroy the mirror that ruined their lives. Ten years after their father brutally murdered their mother and ten year old Tim (Garrett Ryan) was forced to shoot his father in order to save sister Kaylie’s (Annalise Basso) life Tim has been released from the mental hospital he has lived in since the deaths and returns home to find his sister, now engaged to an antique auctioneer, has tracked down the mirror and concocted a plan to destroy the object. Using an ingenuous combination of alarm clocks, kill switches, phone calls, and regular check-ups to ensure that she remains as in control of her mental faculties as possible Kaylie intends to keep the promise she and her brother made as children to ensure that the mirror can’t destroy any more lives. However, despite Kaylie’s best efforts the siblings begin to loose periods of time, find furniture in rooms moved when no one has entered them and hearing disembodied voices, paranoia ensues and it isn’t long before the mirror takes another victim.

An intense horror Oculus works not just because of the brilliant performances from Gillian and her younger counterpart but also because of the patient yet ever looming presence of the cursed mirror. It is not the fear of violence and gore that keeps you hanging on to your seat throughout Oculus but the slow and disconcerting uncertainty that seeps from the screen and envelops you in the same paranoia as the characters. Forced to question what you see some might find Oculus confusing, whilst others will salivate at the tension and ambiguity of the narrative.

Where many horror films rely on flashy gore Oculus offers just enough violence to make you uncomfortable without distracting from the film’s real terror. It is a slow burning picture that builds layer upon layer of dull and unwavering fear, giving you few opportunities to completely relax. It might not be for everyone and I heard several other audience members describe the film as “boring”, but for those with the patience for it Oculus is as terrifying as quicksand, slow and in many ways, safe, but filled with that constant and bone chilling promise of complete destruction.