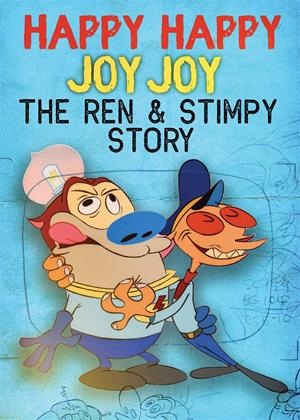 Synopsis:
In the early 1990's, the animated show Ren and Stimpy broke ratings records and was a touchstone for a generation of fans and artists. Creator John Kricfalusi was celebrated as a visionary, but even though his personality suffused the show, dozens of artists and network executives were just as responsible for the show’s meteoric rise. As Kricfalusi’s worst impulses were let loose at the workplace and new allegations about even more disturbing behavior have surfaced, his reputation now threatens to taint the show forever.
With clips recognizable to any Ren and Stimpy fan and interviews with Kricfalusi and his fellow creators whose work has been both elevated and denigrated by their connection to him, this film is a complex look at a show that influenced the history of television, animation, and comedy.
Actors:
Jim Ballantine, Ed Bell, Robyn Byrd, Bob Camp, Vanessa Coffey, Christine Danzo, Stephen DeStefano, Eddie Fitzgerald, Billy Gibbons, Jim Gomez, Bob Jaques, David Koenigsberg, John Kricfalusi, Mr. Lawrence, Bobby Lee, April March, Lynne Naylor, Shawn Patterson, Chris Reccardi, Libby Simon
Directors:
Ron Cicero, Kimo Easterwood
Genres:
Anime & Animation, Children & Family, Documentary, Special Interest

Sign up
SpongeBob Squarepants: It Came from Goo Lagoon

Every kid of the 1990s remembers the surrealness of Ren & Stimpy. The animated antics of the dog and cat was unlike anything else on television. It was silly, surreal, weird, and unbelievably gross. And for being so distinct from other cartoons, it became a cult phenomenon. Nickelodeon had no clue what they had stumbled onto and neither did its creator, John K. What followed was a troubling production of the show and even more disturbing aftermath when Ren & Stimpy left the kid cartoon arena.

The documentary takes aim at the legacy of Ren & Stimpy and John K, keeping both in perspective with creepy connections that can be seen. John, who appears in interviews for this film, is spoken of by his animation co-workers as a rebel of the industry. Stories are told of his early days in the mid-late 1980s of occupying a filthy house of wide-eyed artists seeking to change the animation landscape. As the film points out, 1980s animation was a wasteland of marketing-focused junk. Creator-driven cartoons just seemed foreign for the era. It wasn’t until the likes of Ren & Stimpy debuted as a short film at festivals did Nickelodeon pick it up as the first of their original cartoons for the 1990s, dubbed Nicktoons affectionately.

John was seen as a revolution of the industry, bringing unmatched enthusiasm and exaggeration to his cartoons, delivering pitches that were loud and physical. One executive admits they’d be crazy not to hire someone as overly enthused to churn out a show they’re so passionate about. In the beginning, it was a huge success. It was the biggest show on Nickelodeon and became admired by kids and adults alike. The team of Spumco studios, responsible for animating the entire show, were astonished to discover how much of a success they had on their hands when they first ventured to a comic shop for a signing with a line that stretched for blocks.

But the show ran into troubles as early as the second season. John was apparently such a macromanager that he’d often redo drawings, even once they were approved and heading into the can. The result was numerous delays in production, leading to exceptionally late deliveries that was starting to seriously piss Nickelodeon off. Eventually, John and Spumco was fired from Ren & Stimpy, with production continuing at Games Studios for three more seasons. Some went over to Games while others stayed at Spumco. The few that stayed, however, soon left. And that led to the unchained John who released the raunchier, more disturbing side of his cartoons. This would bring about Adult Party Cartoon, where Ren & Stimpy had rough sex, poop babies, and abuse are portrayed more disturbing than funny. The documentary doesn’t spend too much time on this version of Ren & Stimpy, relegating it to a silent and uncomfortable montage.

Some may feel that Nickelodeon had hindered John, but many stories reveal the opposite. There was much concern among those who worked with John about what he wanted to put into his cartoons. One episode they simply could not air, despite making it all the way through production, was Man’s Best Friend, an episode that introduced the abusive pet owner George Liquor. John based the character on his easily angered father as a means of countering authority figures but the violence and abuse was so intense Nickelodeon wouldn’t let it air. When John left, he demanded to have the George Liquor character back. The executives simply said, “Take it. He’s a horrible character.”

Perhaps my biggest issue with the documentary in that it doesn’t quite dig as deep as it could into the more disturbing elements. The most horrific aspect is by far John’s obsession with young girls, letting a 16-year-old move in with him and then dumping her by the time she reaches her 20s for a younger model. Stories are told from this woman of how strange it was to live with John, better revealed in the shocking 2018 expose that revealed John’s darker side. This, too, is also given a montage that perhaps skips too far past the more concerning aspects. It reflects John’s own feelings on the matter, mentioning he read a portion of the Buzzfeed article on his controversies and then just had to stop.

Happy Happy Joy Joy is still an important documentary for highlighting the truth behind a cartoon that inspired future cartoons and animators. There’s even a sobering aspect to how everyone in the documentary hopes this info about John won’t destroy their joy of the cartoon itself, as even John admits that he hopes they’ll still like the cartoon whether they hate him or not. Because he admits it’s not just his cartoon but everyone who worked on it. At the same time, we can’t look away from John’s problems, as even John admits what he did was wrong and that he unquestionably apologize for his actions. It doesn’t excuse any of his actions though, as well as the more disturbing influences on his cartoons. There was no cartoon on Nickelodeon quite like Ren & Stimpy and there’ll never be a more controversial creator to this degree either. As someone who loved the cartoon and still does, this is the quintessential documentary that tells, if not the whole story, a broader picture on just how crazy this cartoon was from several angles.