Rent The SpongeBob Movie: Sponge Out of Water (2015) 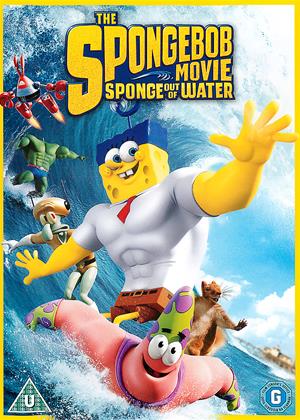 Rent other films like The SpongeBob Movie: Sponge Out of Water

Reviews of The SpongeBob Movie: Sponge Out of Water

The SpongeBob Movie: Sponge Out of Water review by Mark McPherson - Cinema Paradiso

SpongeBob Squarepants, despite its demographic, is not for everyone. If its nasally-voiced title character doesn’t drive you mad with his annoying laughter, then the surrealist nature of the manic cartoon format may send you running for the hills. If the cartoon series and previous film adaptation did nothing to garner your grin, Sponge Out of Water won’t sway you over with any new developments. For all its stupidity and weirdness, I have to admit that SpongeBob still manages to make me laugh just for how daring it aims to be when animated films have become more artsy and commercially sound. The team behind this project are either geniuses of animated comedy or kamikaze mavericks of the medium.

The underwater city of Bikini Bottom is once again consumed by the all-powerful secret recipe for Krabby Patties. Life must be pretty drab under the sea if the one bit of glue for its society is a hamburger. When the evil pint-sized Plankton once again attempts to swipe the secret formula from The Krusty Krab, the written secret magically vanishes before his eyes while in a struggle with SpongeBob. With both Plankton and SpongeBob being the last to be seen with the formula, the town turns on them as it descends into apocalyptic anarchy. The two enemies must join forces to recover the lost codex with teamwork - a concept foreign to Plankton who mispronounces it as tee-a-mwork. The villainous culprit of the theft is live-action character Burger Beard (Antonio Banderas) who wants the culinary concoction for the menu of his own boat/food truck.

The biggest shortfall of the movie is that it feels like two separate stories with an uneven balance. Many are going into this film expecting its main draw to be a CGI version of the primary characters interacting with the live-action surface world. They will be sorely let down as that section only occupies the last twenty minutes of the picture. This may be a blessing in disguise, however, as the live-action portion is not as strong and essentially turns into a stylized fight/chase sequence. The animation team does their best to make the computer-generated animation just as crazy as the traditional 2D animation, but it still feels somewhat limited in what is presented with turning the characters into superheroes.

The good news is the majority of the film that retains the traditional animation style is absolutely as zany and fun as the standards of the TV show. There are some random, but hilariously well-crafted moments of surrealism and absurdity. Plankton attempts to steal the secret of the formula from SpongeBob’s brain, but it turns out that his psychological playground is a candy-themed dreamscape. It’s an outlook of ignorant innocence for SpongeBob and a nightmare for the likes of Plankton. Though to be fair a talking pair of popsicles mimicking the twins of The Shining would be terrifying for just about anyone. At its core, SpongeBob is all about being playful and kind-hearted, but oblivious to the strangeness of his universe.

Take for example a moment where he and Plankton travel through time to retrieve the recipe. A misstep causes them to visit with the all-powerful watcher of the universe who happens to be an English speaking dolphin named Bubbles and voiced by Matt Berry. When asked by Bubbles to keep any eye on the universe while he goes to the bathroom, SpongeBob doesn’t seem so concerned about who the universe watcher is so much as fixing up a planet that was destroyed on his watch. What is the point of this scene? Much like the hilarious bits of the Monty Python movies, absolutely nothing. It’s mostly just to watch Matt Berry voice a dolphin which the filmmakers get quite a bit of mileage out of.

The SpongeBob Movie: Sponge Out of Water is loud, trippy, nonsensical and over-the-top silly. In other words, same old SpongeBob. Children will delight in the film’s goofy sense of simple humor while teenagers and college kids will dig on the bizarre direction. As for the parents who are unwittingly drug to this experience, they’re probably going to be staring in confusion at this odd little animation. Or they’ll join in with the madness by gleefully singing along to the catchy theme song. Writing as a parent, I’ll admit that I was humming the tune.