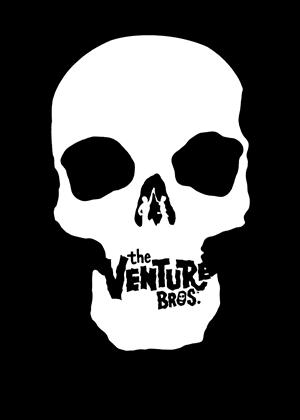 Reviews of The Venture Brothers

What started life as a knowing satire of the Jonny Quest cartoons soon became a blunt, complex, and daring animated comedy series ever made. Where other animated series lose their bite over the years, Venture Brothers only grows more hilarious and wise with age. Maybe it’s the constant stream of the intriguing lore, the wide margin between seasons, or the quality placed in the character designs and animations, but the show has proven to be far more than the mere Quest commentary it originally derived from.

The grand appeal of Venture Brothers, as stated by the creators of Doc Hammer and Jackson Publick, is the about the joys of failure. Scientist and father Rusty Venture may seem like a genius with a spacious estate and expertise in super-science, but he’s far from being a success, constantly living in the shadow of his long-dead father Jonas and always letting his ego get in the way. His teenage children of Dean and Hank may seem like plucky boys ripped straight out of a Harvey Boys novel, but their traditional ways often get them into serious trouble, coupled with a very sordid history around their conception. Their bodyguard Brock Sampson may appear as a grittier version of Quest’s Race Bannon, not the least bit shy to turn henchmen into hamburger, but he’s also a bit of a drunk and has major frustrations with a lost love.

Their adventures take on a variety of missions where they run into odd characters and supervillains. Venture’s nemesis is the villainous Monarch, a butterfly-themed villain that hounds him in his flying cocoon with his theme-dressed henchmen. Along with his male-voiced cohort Doctor Girlfriend, he may seem like a simple gimmick, but the show quickly weaves him into a more complicated villain. As do nearly all the characters that seem like simple one-joke vehicles which soon turn into bigger players in a wider story. Consider how the league of supervillains, dubbed the Guild of Calamitous Intent, is presented as a silly rulebook of hero-to-villain relations managed by David Bowie (though not voiced by the real David Bowie). There’s a bigger story surrounding this than the mere funny sight of Bowie turning into a bird because he can apparently do that in this world.

The show manages to stay so fresh season after season because of how messy and dark the revelations turn out to be. The pasts of Rusty, Monarch, and the Guild come with the most disturbing and shocking of secrets revealed; secrets that they’d rather keep buried. Rusty’s father was seen as a bit of a trailblazing man with classic charm, but it is slowly revealed he was more of an uncaring, backstabbing pervert that dabbled in some sinister deals of super-science. And he’s certainly left a trail of bad ideas behind that will either come back to haunt Rusty or force him to repeat the same mistakes. If not for the hilarious writing and engaging characters, the show could easily a disturbing horror program.

Also worth noting, and what most likely keeps the seasons slowly coming out, is the stunning animation quality. There are very few animated series that ever receive this much attention in design, color, and settings. But it’s far more than just the show looking good. It’s the little details of the animation that truly make the show shine. There’s a perfect example of this in an early episode where one of the Venture Brothers stands up too quickly from their bed, has a rush of blood from their head, and collapses on the floor. Lots of little accidents such as these add to the slapstick nature of the show which springs at any moment to both surprise and shock the audience.

There’s so much to adore about The Venture Brothers in its clever parodies and deep storytelling. While the time spent between seasons is maddening at about 2-3 years per, the wait is well worth it, adding more an animated comedy with an unparalleled appeal. Whether you love a harsh ribbing of the Jonny Quest cartoon or enjoy watching an over-the-top rendition of Doctor Strange, there’s a little something here for everyone, so long as you don’t mind a dark dose of the disturbing with your comedy.