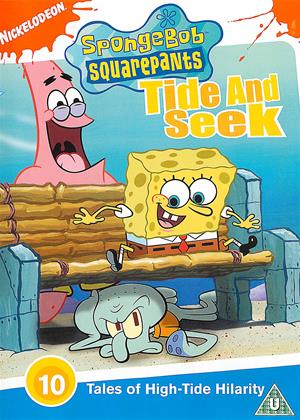 Mermaidman and Barnacleboy III
SpongeBob and Patrick house-sit for Mermaidman and Barnacleboy with strict rules not to touch anything! But they have a question for evil Man-Ray, who's frozen in a tank. So SpongeBob unfreezes him, with the promise they'll release him if he's rehabilitated. And everyone knows that saying "please" proves you're a new man. Right?
Big Pink Loser
Feeling like he hasn't achieved anything in life, especially after he sees SpongeBob's trophy collection honoring his accomplishments, Patrick decides to take SpongeBob on as his role model. SpongeBob is flattered until Patrick starts dressing like him and talking like him and following him and practically taking over SpongeBob's identity!
Opposite Day
That's it! Squidward can't stand one more day of living near SpongeBob and Patrick, so he decides to sell his house. Afraid no one will buy it if they see what the boys are really like, Squidward convinces them it's "opposite day" so they'll act a bit less crazy than usual. But when it comes to SpongeBob and Patrick, the opposite of crazy is, well, crazy.
Squirrel Jokes
SpongeBob becomes a comedy sensation when he starts telling squirrel jokes. Really nasty ones. And this doesn't set too well with Sandy. Especially when everyone in Bikini Bottom starts treating her like she's as stupid as SpongeBob's jokes claim squirrels are.
Rock-A-Bye Bivalve
SpongeBob and Patrick discover a baby scallop that's all alone, so the boys decide to raise him. With Patrick as "daddy" and SpongeBob as "mom," they take to raising "Junior" as a family. Unfortunately, dad is spending too much time at work, leaving mom with the baby, chores and little patience.
Dumped
SpongeBob's beloved snail, Gary, leaves SpongeBob...for Patrick! And SpongeBob will do anything to win him back. And that includes adopting a number of other pets to try and make Gary jealous.
Bossy Boots
Mr. Krabs' daughter, Pearl, comes to work at Krusty Krab and makes changes to the menu and the restaurant's d cor. So when Mr. Krabs realizes he's losing money, there's only one more change that needs to take place, and SpongeBob is going to have to do it: fire Pearl!
The Bully
He's big. He's bad. He's Flats the flounder, the new bully in boating school and he's threatened to beat up SpongeBob, who's terrified. But as Flats soon discovers, coming to blows with a sponge can be very absorbing!
Sleepy Time
It's a nightmare for the sleeping residents of Bikini Bottom when SpongeBob suddenly has the ability to visit their dreams! Unfortunately, he not only visits, but he gets involved, turning their serene slumber into chaotic episodes!
Squidsville
They've finally done it. SpongeBob and Patrick have driven Squidward out of Bikini Bottom and into Tentacle Acres, "where happiness is just a suction cup away". But everyone's the same and things get boring fast, so when Squidward tries showing them how to lighten up, he finds himself acting a bit like, well, SpongeBob!
Directors:
Walt Dohrn, Paul Tibbitt
Producers:
Donna Castricone, Stephen Hillenburg
Voiced By:
Tom Kenny, Bill Fagerbakke, Clancy Brown, Carolyn Lawrence, Mr. Lawrence, Dee Bradley Baker, Sirena Irwin, Carlos Alazraqui, Seth Mumy, Guy Siner, Ernest Borgnine, Tim Conway, Lori Alan, Mary Jo Catlett, John Rhys-Davies
Creators:
Stephen Hillenburg
Writers:
Stephen Hillenburg, Paul Tibbitt, Walt Dohrn, Merriwether Williams, Mr. Lawrence, Mark O'Hare, David B. Fain, Derek Drymon, Tim Hill, Nick Jennings
Studio:
Paramount Home Entertainment
Genres:
Anime & Animation, Children & Family, Kids’ TV

Sign up
SpongeBob Squarepants: It Came from Goo Lagoon

Sign up
SpongeBob Squarepants: The Legend of Boo-Kini Bottom

Reviews of SpongeBob: Tide and Seek