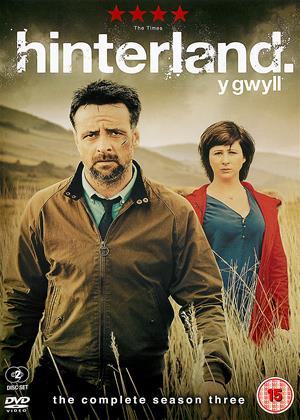 Hinterland: Series 3 follows Tom Mathias (played by Richard Harrington) into his fall from grace after which he becomes a murder suspect himself. The story then digs deep into the first series where some crimes were left unanswered and tries to bring those to a close. All of this is happening whilst the Welsh countryside blooms with sunshine, grass, and for a lack of a better term – a late spring early summer joy. And so the audience is left to enjoy the scenic landscapes in the idyllic village of Aberystwyth (which doesn’t seem so bad of a place to solve crimes in), in which strange things start to take place.

Immediately after his caravan got shredded to pieces (and he himself banged on the head) at the end of series 2, Tom immediately moves into town and finds a solid-looking apartment in a jiffy. There, he meets Manon (played by Sian Reese-Williams), a good-looking woman who takes interest in Tom and whaddya know: the two of them start sharing one bed. Meanwhile, the coppers investigate certain Iwan Thomas (played by Geraint Morgan) as the main suspect in the incident with Tom. Important to note here is that Iwan has been serving in the police as well, but not anymore. If you remember correctly in fact, Iwan has been a recurring character ever since series 1, when Mathias and his partner in anti-crime Mared Rhys (played by Mali Harries) were delving deeply into a crime regarding an old home for children near the creepy sounding (and looking) Devil’s Bridge.

Now, the first two series of Hinterland were clear to hint at us that Chief Supt Prosser (portrayed by Aneirin Hughes) was involved in some shady business back in the day. This Prosser secret involved something about a children’s home, which Iwan investigated back when he was still working in the force. On top of that, Prosser was his supervisor and, for some reason or another, he fired him. Ever since this happened, Iwan was on the lookout in regards to the happenings in the old children’s home.

One thing leads to another and Prosser and Iwan Thomas meet at Devil’s Bridge. Iwan confronts Prosser claiming that he has evidence that links Prosset to abuse of children back in the orphanage some time ago. Prosser does something to Iwan which I won’t dare to spoil, as the majority of the suspense of the series is directly linked to this moment in time.

Hinterland: Series 3 is a well-written, well-acted series that deserves your time. Either that, or you’ll end up watching another series that would be, well, worse off.