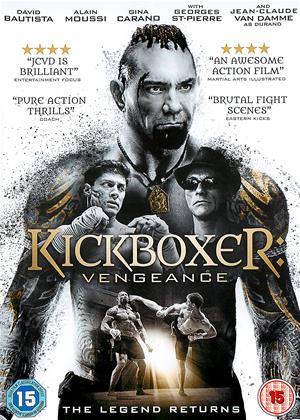 Kickboxer: Vengeance is the sixth installment in Jean-Claude Van Damme’s (at this point, I think it’s safe to ascribe him all the credit) 27 year old franchise, which regrettably, doesn’t pack the amount of punch its previous five incarnations, to a greater or lesser extent, brought to the screen. Still, this particular piece of forgettable footage, if handled properly and with care – can provide a great deal of fun with its countless, maybe excessive violent scenes (yes, for a fighting flick, its scenes are excessively vulgar and aggressive) to end one’s sucky day with.

In the sole beginning, Kickboxer: Vengeance establishes all the fighting clichés; actually, when one comes to better think of it, these are not even clichés: instead, what the audience gets is a simulacrum build upon the worst of clichés, itself consisting of nothing more than filler sequences that jump from one place to another without real reason or proper motivation. This time, Jean-Claude Van Damme acts out the archetype of the wise old and pumped-up man, whose only existence boils down to carrying the torch onto newcomer Kurt Sloane (played by Alain Moussi) and nothing more.

The plot follows and re-hashes what came to be known as the ‘Kickboxer’ curse of the fallen brother. Main antagonist Tong Po uses excessive force to deal a lethal blow and vanquish one of his opponents, who happened to have a younger brother who has always been the underdog during his passive life. Finally, younger brother wakes up from a deep sleep, and determined to avenge his brother and regain the family’s honor, embarks on a quest of successive fails that ultimately lead him to his final battle. You know how the rest goes.

In terms of screenplay and story, Kickboxer: Vengeance by director John Stockwell doesn’t have much going for it. Some of the fights brim with potential that, sadly, stays unexplored in the long run. Music is on the weaker side, while camera work is sub-par, at its most glorious moments.

Kickboxer: Vengeance can’t even pull its actors together to act in accordance with their assigned archetypes. And what is it with its production value? The film feels amateurish and poorly edited, and at times the camera angels ruin what is probably an otherwise fine choreographed fighting scene. The chemistry between leads is scarce to nonexistent in a buildup that amounts to nothing in particular.

As muscles bulge from bodies and sweat pours down the backs of naked Thai chicks - Kickboxer: Vengeance packs some excitement to be had, but no Oscar-worthy or paradigm-defying stuff can be found here.

For mixed martial arts acolytes and fans, Kickboxer: Vengeance will most likely quench your thirst for testosterone and blood. For mere mortals, I recommend skipping this one and sticking to the 1989 original Kickboxer incarnation.