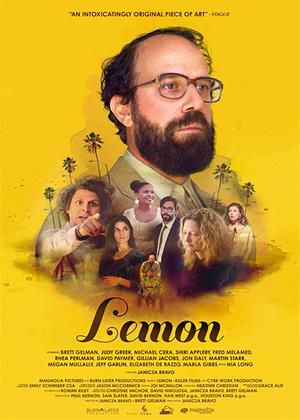 Not released
Person to Person

Not released
Dealin' with Idiots

Lemon has a certain zest of originality, but also a familiar bitterness to its tale of sophisticated suffocation. You’ve most likely seen an indie-comedy of similar construction where a hapless man who believes himself to be intellectually astute is proven to be wrong in a series of absurd and dry comedic situations. And while there is a certain glee in watching the aged hipster fall from grace, there’s a bit of numbness to its meandering nature.

Isaac (Brett Gelman) embodies a familiar archetype. He’s a balding, overweight man with a thick beard and big glasses. He’s a stage acting teacher that only lavishes attention on the students he favors most, turning on the ones he despises by verbally harassing them in class for seemingly nothing moments of a play. His girlfriend Ramona (Judy Greer) is blind and pretty much on her way out the door of this relationship.

This creates a domino effect for Isaac who feels as though he is losing everything in his life. His favorite student in the class, Alex (Michael Cera), soon becomes his least favorite as he attempts to pull the young man closer and is denied any affection. Isaac takes on side-gigs of appearing in commercials for medical disorders he doesn’t have yet seems like he would be at that age to be worried about his bowels. His family offers him no warmth at all, coming home to a family reunion where every single member seems to be bitter and in a bad place in their lives. Isaac may have broken up with his girlfriend, but someone else in his family is going through a divorce. By the time Isaac finds a new romance with a black woman, he is already stumbling through her family’s BBQ party, trying to seem like the knowing white guy who isn’t a racist.

Director Janicza Bravo takes some weird routes with this material that don’t always work. There are small moments of quiet breaks from the strangeness, the highlight being at Isaac’s family dinner where, after the tearful announcement of a divorce is made, the family transitions into singing in the living room with a certain surreal glee. The awkwardness works in bits and pieces, as when Isaac becomes so frustrated with Alex he launches a cake in his direction. I couldn’t help but feel that more of his life should fall apart towards the end where the film instead decides to wander into trippy drug territory where Isaac smokes weed at his girlfriend’s party and can only hear stuff backward. Although I must admit there’s a certain resonance that comes through when during his stoner trip the grandmother of the party begs to run away from such an event.

Lemon does boast a somewhat original premise, but still comes bundled with a lot of extra baggage to make it work, where the subplot of Isaac killing two birds he was supposed to watch is more or less a forgettable gag. A deeper dive into this film would probably reveal something to say about the state of getting older and finding fault in the very sophistication the cultured may cling to. Perhaps it would be more visible if the staging weren’t so overt to make Isaac as awkward and hapless as possible, to the point where he points out his bedroom to Alex by stating that’s where he and his girlfriend had the most sex. Most human being don't talk that way, but, then again, most movies are not quite like Lemon.