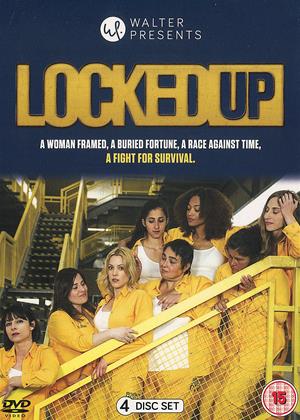 Reviews of Locked Up: Series 1

Locked Up: Series 1 (aka Vis a vis) review by Adrijan Arsovski - Cinema Paradiso

Contrary to popular belief, Locked Up: Series 1 (also known as Vis a Vis) is not an “Orange is the New Black” clone, although it comes damn near of being one if you ask me. For what it’s worth however, the first installment of Locked Up is very thrilling, intense, and a truly cinematic experience – despite being a series (and a good production I might add). So, without disclosing any spoilers or anything of the sorts, Locked Up is an exciting character-driven drama, featuring a prison backdrop that reminds of Prison Break at its best. At its worst, it’s just another iteration of OTNB, which is not bad at all, when you come to think of it (hint: it’s also darker in atmosphere and tone).

The series follow Macarena Ferreiro (played by Maggie Civantos), a young woman whose insatiable thirst for riches has led her to become a culprit in regards to some large chunks of money. She defends herself by way of denying the underlying motives of the deed, but she ends up being incarcerated nevertheless. And so, just as she settles in her cell, her cellmate is viciously attacked and killed, which becomes a blessing and a curse for Macarena. Blessing because she finds a SIM card in the cellmate’s belongings; curse because of everything that follows after.

For those easily squeamish, Locked Up can be quite uncomfortable and grueling at times; this doesn’t mean that it’s also depressing though. The series threads that fine line between action, thrills, and hooks that, undoubtedly, hook you to want more out of the ordeal as each episode nears to its end. This speaks volumes about the writers’ dedication, as well as attention to detail, since without those – Locked Up could easily derail and bore the viewer to death (which thankfully doesn’t happen). And so, Macarena goes on about her day.

The other characters never fail to impress too: Najwa Nimri really strikes fears in the hearts of many as Zulema; she possesses a fairly unpredictable demeanor who that carries on to her threats to seem as real as she makes them to be. And Berta Vázquez as La Rizos also nails her role as the emotional counterpoint to Macarena’s tacitly good behavior. The rest of the cast serve their roles in a respectable manner, and without saying anything that would spoil the experience, watch out for Inma Cuevas as Anabel (somewhere in the middle of the season).

Finally, Locked Up is a convincing exercise in prison life, mixed with drama, action, thrills, heartbreaks (both literal and metaphorical), and a plethora of other things that make the first series seem worthwhile for your time. A time well-spent that is.