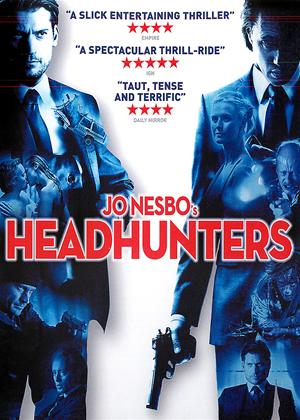 It's a crime action thriller, it's in Norwegian with subtitles (though there is a dubbed English soundtrack, but I haven't watched that) - but don't let that put you off: it's excellent!

Roger Brown is a successful businessman (a recruitment consultant, aka a 'headhunter') who has an inferiority complex because he's a lot shorter than his beautiful wife. He compensates for this by stealing artwork on the side to allow him to live in an expensive house and to buy his wife (and his mistress) expensive gifts. But he takes a step too far when he steals a Rubens (?) and the owner tracks him down, turning the film into a chase thriller. Great stuff with some excellent scenes and good acting throughout.

The film was nominated for a 2013 BAFTA for 'Best Non-English Language Film' but lost out to the excellent 'Amour' - but in my view it's certainly a worthy contender.

One of the best thrillers I've seen this year. 5/5 stars - highly recommended.

Best Thriller of the Year! - Headhunters review by CS

For those who like the classic European thriller with lots of unexpected twists and turns, this is for you. I won't go into the plot as everyone seems to have already done so, but this is such a fantastic film, in the style of classics, a very well thought out directed film in every way. The acting is fantastic and the drama and tension really build. In the end I was rooting for the art thief as he turns into a kind of anti-hero and it had me fixed to the screen throughout. A fantastic relief from all the boringly overhyped Hollywood tripe that seems to have come out in recent years!

Starts slow but a good film, recommended for a night in where no killing or adventure is required. If you liked buried then this will be up your street.

Based on a novel Headhunters is a European thriller about art theft and curiously deep and manipulative characters; the film opens with the main character, Roger Brown (Aksel Hennie) telling us the story of how he found himself in his current predicament, this is a well known narrative ploy many of us are used to and we find ourselves immediately believing everything he says, whilst at the same time knowing his words are loaded with a second meaning, a personal creativeness if you will.

So, on the surface Roger (Norway’s most successful professional head hunter) seems like a fairly average man, hard working and a little vulnerable, who through sheer luck and hard graft has landed himself a great job, a nice house and a beautiful wife. We learn fairly quickly however that Roger has been making a little extra money on the side of his headhunting business; as an art thief. And so, when he is introduced to Clas Greve (Nikolaj Coster-Waldau) the owner of the most sought after art pieces in the modern world, he sees his chance to become financially independent.

What follows begins as somewhat of a caper movie, a classy one with just the right amount of humour to be sure, until the twists and betrayals begin to creep in, turning Headhunters into a tense thriller.

The performances in Headhunters are brilliant, right down to even the tiniest bit parts and the story is hugely impressive. Director Morten Tyldum takes a lot of the novel’s greatest ideas to work with and like a painter, makes something fantastic with the most simple and raw material at hand. Though it may not be a masterpiece, Headhunters is certainly worth exhibiting in the gallery of your front room.