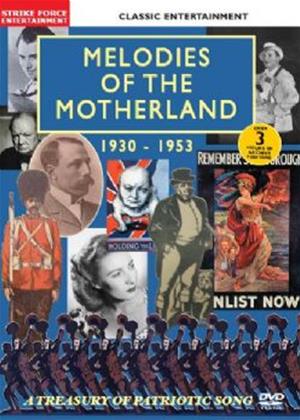 Synopsis:
At over 3 hours long, 'Melodies Of The Motherland' is a veritable treasury of patriotic song. 'Melodies Of The Motherland' is a comprehensive musical celebration of Great Britain and Britishness; compiling musical features from original archive newsreels and vintage documentaries from the golden era of the end of Empire. Covering the years from 1930 through to 1953, it includes many evocative and morale boosting popular songs from the Second World War.
Classic songs such as Rule Britannia, Old Father Thames, The Border Ballad, Land Of My Fathers, Land Of Hope & Glory, Danny Boy, My Little Welsh Home, Land Beyond The Tweed, The Deathless Army, I Left My Heart In An English Garden, Absent Friends, London Will Rise Again, This Is Worth Fighting For, Greensleeves, Sons Of The Brave, She’s A Lassie From Lancashire, Britain All The Way, Blow The Wind Southerly, We’re The Man From Sussex, Blaydon Races, Devon Glorious Devon and Maybe It’s Because I’m A Londoner among many, many more! The Metropolitan Police Choir sing a glorious eulogy to ‘Elizabeth Of England’ in 1953 amongst a huge star studded cast of the cabaret and theatrical celebrities of those golden yesteryears, all of whom pay fitting tribute to our island fortress! A roll-call of stars that includes, among many others, Wilfred Pickles, Vera Lynn, Sidney Burchall, Raymond Newell, Lance Fairfax, Henry Hall, The Glasgow Male Voice Choir, Billy Reid, Margaret Eaves and ending with Sir Edward Elgar conducting perhaps the most cherished anthemic tribute of them all, ‘Land Of Hope And Glory’!
Genres:
British Films, Music & Musicals, Performing Arts, Special Interest
Countries:
UK