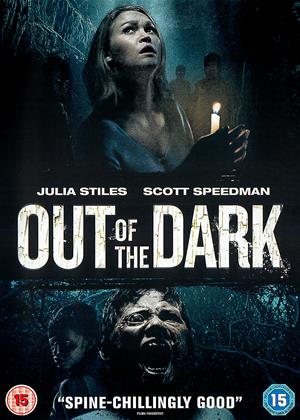 Reviews of Out of the Dark

Out of the Dark review by Mark McPherson - Cinema Paradiso

Our of the Dark starts off with a strong scene for a horror picture. A spooky house, a thunderstorm, an uneasy man with a knife and creepy children hiding in the shadows. The setting is established well and gave me some hope that this could be a technically pleasing spookfest. But the scene is too long and drawn out. The frightened man who hears the noises of the children slowly makes his way down the stairs, slowly opens the doors, slowly spots that nobody is there and then slowly goes back up stairs. If you’re still awake for this cold opening, you might just catch the shocking moment of his death before the credits roll. Even the death shot is drawn out far too long where I found myself giving the wrap it up motion for this guy to bite the dust.

It perfectly sets the tone for a picture that has a gorgeous setting, but not a long enough story to fill its meager 90 minute running time. As such, the haunted house/child kidnapping plot is stretched to its absolute limits of basic scares. We’re introduced to the new family of a spooky house, given more character setup than development and told of its haunting legend several times over. A group of children died in the 1990’s from mercury poisoning from a nearby plant. Now they need to murder other children because they wouldn’t exactly be scary ghosts if they didn’t.

The family they terrorize is a UK couple that has moved to Colombia. Sara (Julia Stiles) plans on being the new manager of her dad’s factory in Santa Clara and brings her husband Paul (Scott Speedman) and daughter Hannah with her. There’s nothing all that interesting to them or their artificial family dynamic. They’re all just pawns to be messed with by the ghosts and to solve the mystery of the masked ghost kids. Of course, to gain our sympathy, Hannah has to be kidnapped since she’s staged as the cutest victim - easily baited by the safety of her stuffed rabbit.

To stall for time in between Hannah being kidnapped and discovering the secret of the mercury poisoning, director Lluís Quílez struggles to find ways to scare the audience. This includes watching Julia Stiles get stuck in a dumbwaiter where a ghost might pop out. And, just because it seems to have been a hassle to get a shot inside a dumbwaiter, she’s not the only one who gets trapped in there either. All the scares follow the same pattern: ghost children appear in the shadows and then they are gone. Set for an extended period and repeat for the length of the picture. There’s a trail of clues to follow, but nothing all that mysterious if the character did a minor bit of digging. Maybe their internet connection is spookily low for living out in the country of Colombia.

Though there isn’t a clever idea in its head, Out of the Dark is at least pleasing to the eye. Shot in Columbia, there are some great locations that are amazingly staged. Sara and Paul attend a party by the water which features fireworks and a rather festive ceremony considering it commemorates the death of the kids. The market in which the family gather food from is a busy and detailed area with plenty going on at the various stands. But these locations just don’t feel properly used. There are several chase scenes for tracking down a disappearing Hannah, but are all staged in dark forests or the gloomy estate. Just imagine how great it would be to see Sara and Peter pushing their way through a crowded street - spotting flashes of spirits leading their daughter away. We are instead only treated to some brief glimpses of the ghosts in these section before the climax leads us down into the murky depths of a mill.

Out of the Dark is out of ideas from the start. It takes a real poor script to shoot in such a lush location and deliver a dull picture. Its only claim to fame is that it is the first English-language production of the Colombia-based Dynamo production company. One interesting fact to consider before this bland excuse for terror evaporates from the mind and disappears into the bargain bin forever.