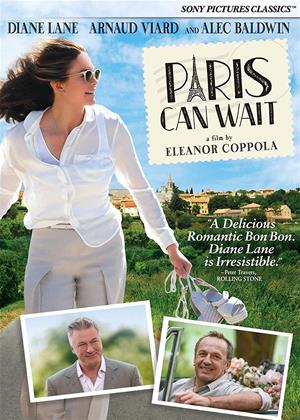 Synopsis:
Anne (Diane Lane) is at a crossroads in her life. Long married to a successful, driven but inattentive movie producer, she unexpectedly finds herself taking a car trip from Cannes to Paris with a business associate of her husband. What should be a seven-hour drive turns into a carefree two-day adventure replete with diversions involving picturesque sights, fine food and wine, humor, wisdom and romance, reawakening Anne's senses and giving her a new lust for life.
Actors:
Diane Lane, Alec Baldwin, Arnaud Viard, Elise Tielrooy, Cédric Monnet
Directors:
Eleanor Coppola
Voiced By:
Linda Gegusch, Élodie Navarre
Aka:
Bonjour Anne
Genres:
Comedy, Drama, Romance

Sign up
National Geographic: Six Degrees Could Change the World

Not released
A Little Romance

Not released
A Walk on the Moon

Not released
The Getaway

Reviews of Paris Can Wait

My best guess is that the genuine appeal of Paris Can Wait is that its the escapist fantasy for the housewife that wants to get away. I had to remind myself throughout the picture that this is indeed a Lifetime Channel production meaning that, unless there’s a horrendous rape or murder, everything will turn out okay for a woman being led around Europe with a man that isn’t her husband. Perhaps in another film a more steamy romance would form on this trip that ends with a new love. This is not the case, for better and worse.

It’s better because Diane Lane’s character of Anne is a woman who doesn’t seem like the cheating type. She has dreams of photography while accompanying her husband (Alec Baldwin) on his business trip but doesn’t feel like she’s been given enough attention. This goes double when an ear infection prevents her from flying out from Italy to Paris. No matter. Her husband’s business partner Jacques (Arnaud Viard) will take her by car. Not only will he make sure she gets to Paris on time, but he’ll also make plenty of stops along the way to give her the ultimate European experience. This includes fancy bakeries, wines, locations, and a picnic in the most gorgeous of spots.

Now if you’re thinking something deviously sexual is on the horizon, again, consider the Lifetime logo at the beginning and the PG rating. Though everything about Jaceques tactics seems to be plucked from a book on the art of picking up a married woman, his intentions seem pure, despite the results. This is mostly because he reveals little of his personal life, speaking more as a representative for Europe’s beautiful side than being an actual character. He opens Anne’s mind to the idea that Americans should just enjoy chocolate cake and not find reasons to justify. What a dream of a European tour. It’s only when he speaks of tragedy in his family that the greater connection seems to form and, surprise, Anne is smitten with him.

Furthering the tour aspects are plenty of gorgeous shots across the country. We get plenty of beautiful landscapes and countryside towns, as well as plenty of mouth-watering shots of the finest food. It’s the kind of film you just put on and salivate at all the vivid sights, sounds and smells of the region. Yeah, we don’t have smell-o-vision anymore, but if this film did…

It’s the kind of trip I’d like to imagine any married woman would like to take. Being whisked away to parts unknown with amazing discoveries and dining, a handsome Frenchmen guiding you along the way. And at the end of the journey, Anne refreshed and ready to eventually pursue a relationship with a man who isn’t her husband. Will the divorce be messy? Will Jaceques turn out to not be so charming a man when they settle down? Who cares? All that matters on this film is literally the journey to finding something new. I’d love to see a sequel where she is married to Jaceques and falls in love with an Asian: Tokyo Can Wait?

Paris Can Wait is the type of light junk food for a female night in, serving up romance based more around food and friendship than a deeper connection. So if you ever find yourself with that stereotypical scenario of ditching your husband and running away with a French fellow, here’s that very film to satisfy that desire, with pastries, wine and all.