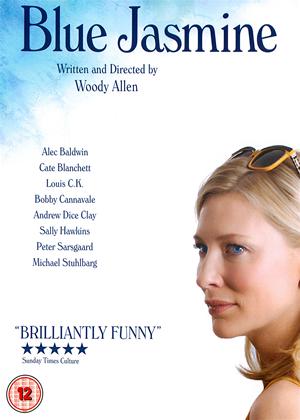 For a director who (perhaps comically) stereotyped his milieu as New York, left wing, Jewish intellectual, Woody Allen has always addressed politics, if at all, then cautiously and tangentially. This is his most political film, being concerned with the kind of toxic capitalism associated with Bernie Madoff or Allen Stanford. But it's still an oblique approach as it focuses on the wife, Jasmine played by Cate Blanchett, based on the experiences of Ruth Madoff.

Her husband Hal (Alec Baldwin) is involved in multiple crooked Ponzi schemes, some managed through her. After Jasmine learns of his infidelities, she calls the FBI and he is jailed, and their son estranged. After mental collapse and some degree of recovery, she goes to live with her sister Ginger (Sally Hawkins) in San Francisco.

Blue Jasmine is a febrile drama, pitched quite uncomfortably rather nearer tragedy than comedy. But what it overwhelmingly becomes is a vehicle for Blanchett's powerful performance as a woman who has lived a life of delusion, now compelled to face reality, and not only blinking, but falling apart utterly. She makes it a great film, especially supported so adroitly by Sally Hawkins. There was no doubt who would win best female actor Oscar that year.

The film isn't as assuredly plotted as usual for Allen, and turns on two huge coincidences. But there are some lovely widescreen pictures of San Francisco and brilliant cast performances in a relentless melodrama. Jasmine's ultimate unravelling at the end of the film is pitiful. She's a terrible moral washout, but the capacity for the audience to forgive is near inexhaustible.

Surely this has been wrongly categorized? Comedy - you must be joking:)

Is it directed by Woody Allen's alter ego, perhaps, or a Woody Allen from an alternative universe? Some of the dialogue is clearly Woody, but without the humour, dead pan or otherwise. Sure, it's well acted - or one might say over-acted - but the characters are quite unlikeable, unrealalistic and frankly, I couldn't have cared less about them. I'm tempted to say it was a waste of 90 odd minutes of my life, but perhaps not quite in that class. However, it was bordering on "let's scrap this and find something interesting to watch" territory (which saved it from a one star rating). The plot was OK and ending after quite a deal of hard work was quite inconsequential.

Frankly, don't don't bother, would be my advice.

One star for effort - Blue Jasmine review by BE

In am not usually a Woody Allen fan but swayed to hire this movie by some really excellent reviews. Unfortunately, I didn't enjoy it. I found the characters abrasive, unlikeable and unreal. I don't think falling asleep twice during transmission helped but this was the magnetic strength for me of this film!

At last it is over. I had expected to laught, but found it difficult to even smile. Well made and well acted misery from the land of Trump.

Too clever for own good! - Blue Jasmine review by CP Customer

The acting is good. The script believable and draws you in but we skipped half the film and watched the end without any element of surprise or delight. Rags to riches story well told but ultimately unsatisfying. Don't bother unless you get your kicks from feeling superior.

Even though I don't like Woody Allen films I thought I would try this one due to the actors in it. Don't bother, not worth it!!

My first impression as Jazz Music played in the background was that it didn't fit San Francisco in mood. Blanchett's character seemed straight out of a New York luxury apartment with a billionaire husband. Then we meet her sister (both adopted) who came across as a working class New York Jewish girl. In fact the whole film felt like Allen had cut a big chunk out of New York and popped it in SF. It could be I don't know enough about SF though so don't take my word for it!

Watching Blanchett's character disintegrate scene by scene makes for an excruciating experience. She proceeds to damage the lives of those around her and I found myself asking 'why did Woody make this film'? I didn't feel it told me anything that wasn't obvious. However, I did see it through despite squirming I my seat, largely because of the performances which nailed the emotional tidal wave exceedingly well. Like a heavy emotional drama? This is for you: want an evening of entertainment? This isn't for you.

A brilliant but harrowing film - Blue Jasmine review by MM

The cinematography is gorgeous and the acting is outstanding across the board. Cate Blanchett's performance is a tour de force. The plot line at times seems too obvious while at others seems intricately brilliant. The subject matter is at once dreamlike and then viscerally real. The music is low key but carries the film with a subtle style. Not one to be forgotten easily i think, if you can bare to watch it!

Having never been a particular fan of Woody Allen I have always accepted that for many his neurotic and rather sideways comedy has a certain appeal; in recent years however I felt Allen has been undergoing a definable change in his personal psyche, his movies have, in my mind, become more and more hit and miss, with his attempts to rekindle his previous comedic atmosphere falling far short whilst his personal indulgences and movies made simply for the love of art have utterly sparkled with ingenuity and beauty. When asked to sit down and watch Blue Jasmine I admit I was quite apprehensive, unsure as to whether I would be greeted with another poor excuse to imitate his early success or something a little more haunting and genuine.

Luckily for me I found myself presented with the latter; albeit a far grittier and greyer movie than the shining effervescence that was Midnight in Paris – there is still something tangible and real about Blue Jasmine that I have always felt Allen’s signature neurosis lacked.

Jasmine, played excellently by Cate Blanchett, is a well to do high society wife who lives in New York with her businessman husband Hal (Alec Baldwin), yet as the film opens it is already clear that there is something going on behind the scenes in the life of Jasmine, who for some as of yet unknown reason has moved in with her adoptive sister the blue collar and emotionally generous Ginger (perfectly brought to life by the wonderful Sally Hawkins). It is slowly revealed that Jasmine’s life of luxury, swanky parties and fancy jewellery has been funded by illicit and immoral business transactions on her husbands part and now that he is out of the picture Jasmine herself has been forced into making a living for the first time.

A rather typical riches to rags story one would expect there to be a wealthy and wonderful man waiting to bring Jasmine back to riches again and though the narrative offers up Peter Sarsgaard’s Dwight this is not a typical Hollywood romance and as ever Allen shows that life is never really that easy.

The fantastic performances that Allen always seems to bring out of his actors, whether they themselves are well traversed in the art of acting or veritable on-screen newbies, is once again what brings the real magic to the narrative. Blanchett, living with her nose upturned is constantly affronted and disapproving of her sister, her rather inept boyfriend and noisy, manic children, yet her life of control is constantly undermined with a clever and rather satirical sarcasm that is both sharp as a whip and incredibly funny.

Yet Blue Jasmine is unlike any other Allen movie I have seen, the comedy here is entirely implicit and the over arching tone of the piece is a very low, gritty and painful one. There is little sympathy and nothing to warm the heart, yet the film ends with a genuine sense of competition, things are, by and large, as they should be, the characters have been served their just desserts and though most of them remain marginally unhappy the viewer is left with a feeling of satisfaction as to the nature of the world.