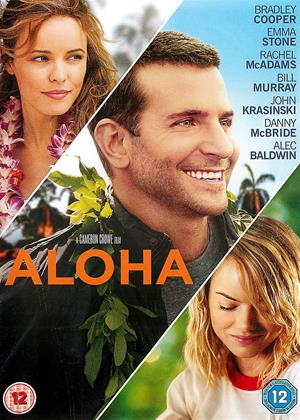 Look how far Cameron Crowe has come. He was once a very promising director with his attention-grabbing drama Jerry Maguire and the music journalism picture Almost Famous. Those pictures felt as though they had some personal emotion - very much the case with Almost Famous which was practically autobiographical of Crowe’s music writing at Rolling Stone. But I’m at a loss trying to find where he was drawing from with Aloha. Did he want to make a drama about family or a military thriller about politics? Does he have some deep connection to the islands of Hawaii or some fascination with outer space? I’m not even sure what he was thinking when casting Emma Stone as a native Hawaiian.

There’s no proper build-up as Crowe drops us right into a plot that never slows down to explain itself or let the audience catch up. Bradley Cooper plays conflicted military contractor Brian Gilcrest - tasked with coordinating a new space center in Hawaii with the blessing of the natives. He’s become worn and weary of the world after having served in Afghanistan with muddy results. If his career wasn’t already a chore, his love life turns out to be just as complicated. He finds himself getting involved with the family of his ex-girlfriend (Rachel McAdams) and trying to ward off the advances of his plucky Air Force liaison (Emma Stone). The plot finds Brian meandering around Hawaii trying to connect with an array of odd characters until we eventually reach the last-minute climax of a rich industrialist’s scheme to dominate outer space with a weaponized satellite.

The casting for this picture is so strange and odd. Some of the choices make sense as with Adam Baldwin playing an angry General and Danny McBride playing a slick-talking Colonel. Others are just weird as with John Krasinski playing a mute husband and Bill Murray playing an eccentric industrial tyrant. And then there’s the downright insane casting of Emma Stone as a native Hawaiian. Watching her communicate with a native king and trying to showcase her culture to Bradley Cooper is just all kinds of awkward and makes the biggest case for whitewashing roles being a serious issue. It’s an even bigger mistake when you realize that she is also supposed to be part Chinese.

Crowe offered an apology for this casting, but stated that the character was supposed to be based on a real-life person he knew from Hawaii with red hair. It feels as though it was just one of many themes that went horribly wrong in conceiving this picture. As Crowe struggles to stitch together this mess of a movie, he falls back on the most artificial of sentimentality and the most laughable of military sci-fi plots. Worst of all, Aloha felt cobbled together in bits and pieces to keep the audience as confused as possible. Maybe that would be okay if there was some tone and character actually worth caring about, but even that felt phoned in as well.

Aloha in this case works as a goodbye to the talents of Cameron Crowe’s direction. Everything about the movie felt as if it was a massive misfire from the writing to the casting. Perhaps he just couldn’t decide on a plot as he continuously mounts story after story - slathering all of it with shades of patriotism and hokey romance. It’s a bad movie, but I’m not too sure what kind. I’m not even sure Cameron Crowe knew what kind of movie he was making either.