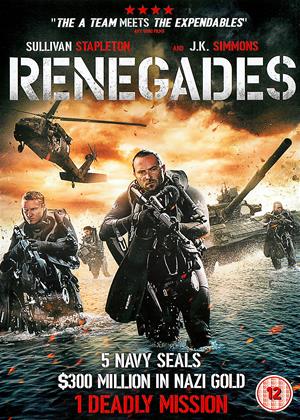 Synopsis:
When you're part of the Navy SEALS, America's most elite combat unit, every operation is a life and death mission into the unknown; something a group of Renegades are about to discover. When a team of SEALS on assignment in war-torn Europe discover a haul of stolen Nazi gold resting at the bottom of a Bosnian lake they see a chance to rescue the treasure and help out the impoverished locals whose lives have been ripped apart by conflict. As the modern day Robin Hoods attempt to right the wrongs of war, though, they are detected by ruthless enemies and an act of selfless valour becomes a desperate race against time, with the two sides prepared to stop at nothing.
Actors:
J.K. Simmons, Sullivan Stapleton, Charlie Bewley, Sylvia Hoeks, Joshua Henry, Diarmaid Murtagh, Dimitri Leonidas, Clemens Schick, Ewen Bremner, Peter Davor, Mahamadou Coulibaly, Alain Blazevic, Karim Cherif, Denis Brizic, Marko Cindric, Igor Hamer, Artjom Gilz, Denis Lyons, Patriq Pinheiro, Jeffrey Mittleman
Directors:
Steven Quale
Producers:
Raphaël Benoliel, Luc Besson
Writers:
Richard Wenk, Luc Besson
Aka:
The Lake / American Renegades
Studio:
Signature Entertainment
Genres:
Action & Adventure, Drama, Thrillers

This film cost over 70 million to make and made 2.2 million in box office and its not hard to see why. poor gung ho dialogue a lack of any kind of drama and excitement and poor acting. give it a miss.

Perhaps 2019 was the perfect time to debut the expensive and sloppy military heist picture Renegades alongside Netflix’s Triple Frontier. Both stories involve soldiers who feel they’ve been cheated and decide to take advantage of the potential to pilfer some treasure for their woes. While Triple Frontier touched on a more appealing aspect of struggling soldiers that are underappreciated where they need to score some cash, Renegades is a far more brazen and goofball action picture that mixes Michael Bay style violence with somewhat screwball heist antics. The result is a picture that is sometimes enjoyable and many times tedious.

We follow a team of NAVY Seals during the Balkan wars. Everything seems to be going swimmingly for them amid their operations of infiltration and blowing stuff up real good. A mission that starts with them disguising as reporters to gain access to a secretive general soon turns into them running and gunning around a city, eventually hopping into a tank and causing even more cartoonish havoc. They even get all the typical Bay-ism lines in between killing and blowing stuff up, making such familiar remarks as “having fun yet” and “now I’m really pissed off.”

The war seems to be going alright for them, despite being called out by their aggravated superior officer perfectly played by J.K. Simmons in his usual Whiplash-style of chewing others out beneath him. They celebrate with a rousing round at the bar and one of them hooks with a woman that has a surprising secret. She reveals that her grandfather had access to a massive stockpile of gold that is secretly buried at the bottom of the sea. If only there were a ragtag group of operative skilled and secretive enough to take on this job. And so the group of soldiers decides to help this woman out. You know, as long as they get a cut of the profits.

From there the film goes about the motions of trying to stage a military caper ala Kelly’s Heroes without much surprise. There are plenty of underwater sequences, daring moments of combat, and plenty of forgettable banter slung amid dangerous situations. The thrills don’t come as satisfying when the characters are all cardboard assemblies of one-liners and barking, while the special effects are too ludicrous to ever by a sense of reality or tension. It’s giddy staging without giddy energy.

There’s little surprise that Luc Besson co-wrote and co-produced this action picture of American NAVY Seals that feels strangely distant from anything personal. It’s a trend I don’t want to admit but it has become progressively more obvious after such uniquely un-American pictures of American stories in films like Kings and 12 Strong. Renegades once more fits neatly into that column of films where character serve little more than tired tropes. When J.K. Simmons does little more than reprise his order-shouting madman persona from Whiplash, it’s a testament to the wasted potential of a film that’s strangely procedural for a military caper. A forgettable action picture doomed to be lost in the piles of sequels to The Marine and dozens of straight-to-video Bruce Willis action pictures perhaps placed higher on the heap for Simmons’ genuine commitment.