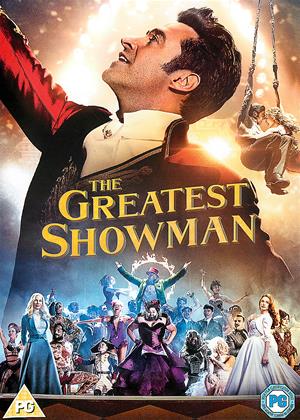 Reviews (18) of The Greatest Showman

I had been really looking forward to seeing this movie after the critics pannned it but audiences seemed to love it.

Hugh Jackman was good, but I did not warm to the songs and the special effects were not up to modern standards.

Really and truly wanted to love this as I am a fan of musical theatre but it simply doesn't work. It has none of the magic of the Baz Luhrmann inspired musicals of recent times. Hugh is adequate but not charismatic as you feel he should be. Zac Efron sleep walks his way through it. I've read that the music is catchy and makes you want to return to watch time and time again. We switched off and could not remember a single tune.

This is me I recall being a good number in the film but no idea how it goes now.

It will appeal to some I'm sure but it left us cold not helped by the inaccuracies of this film vs the true story of PT Barnum.

wife wanted to watch this so I threw it on nor expecting too much as my best musical is the wiz of oz. it gave me goosebumps it was brilliant one of the best entertaining films I've seen in recent times. give it a go it surprised me.

Would have worked better as a drama without all the R & B songs (in 1860s America!) - The Greatest Showman review by PV

I felt I had to watch this and it's not a bad film BUT I would have much preferred it as a straight drama with no songs.

Well, for one thing, the songs are modern R&B and the setting is 1860s/70s USA - and that jars badly. Compare to the genius of the Sherman brothers who wrote in the style of the Edwardian musical hall for Mary Poppins because that story was set in Edwardian times.

Had to give it a 4 as is so dynamic. Goes forward at a fair pace, and dancers are pretty excellent. Not really into any musicals, but have to give credit where is due.

I enjoyed it - The Greatest Showman review by Ernie

If you are after a musical that that entertains then this is for you, if you are after historic accuracy then you will be disappointed. I dont normally watch Musicals but this one works.

Loved it!! - The Greatest Showman review by TB

Really wasn’t sure if I’d like this but after hearing such good reviews by friends, I gave it a go and absolutely loved it!

It’s colourful, dramatic and has a story that fits in well with excellent and memorable songs, while also delivering a message that you should never give up on anything in life and if you a have a dream......go for it.

I enjoyed this much more than I expected. Terrific visuals, dancing and music. The cast were fab, especially Hugh Jackman and Zac Efron. Feel good stuff. Story is very predictable but that doesn't really matter as it's very entertaining.

My son and I really enjoyed this film. It was uplifting and slightly cheesy but that’s what made it so much fun for us.  Im not musical fan usually , but this was for me a classic for my sons generation.

The P.T. Barnum musical aims to sucker the audience in with a display as flashy as the showman’s circus. There’s decadent staging, a toothy Hugh Jackman, and catchy songs by the lyric writers of La La Land. Perhaps it was a poor choice in marketing to slap the La La Land association on the poster. While that musical did a brilliant job infusing classic Hollywood style with an invigorating jazz taste, The Greatest Showman felt as little more than a standard score with music built for pop radio than defining any particular style all its own.

Jackman plays Barnum in a manner that celebrates his legacy rather than shines a harsher light. Any drama from Barnum’s questionable practices of forming a sideshow of freaks, being terrible with money, and potentially cheating on his wife is sugared and watered down for a pleasant PG rating. After all, if we were to focus too hard on his more disgusting aspects of showcasing fresh corpses, we couldn’t enjoy his charming and lavishing songs about putting on the greatest show.

But let’s be fair with the musical numbers themselves. Yes, many of them are well-staged and presented choreography that is always fast and detailed. The best scene by far is of Barnum negotiating with playwright Phillip Carlyle (Zac Efron) at the bar, their musical conversation turning into a dance of drinks being slung and tossed across the bar. Some are more elaborate, as when Carlyle and the acrobat Anne (Zendaya) share a romantic melody amid twirling on ropes. And some are fairly simple with Swedish singer Jenny Lind (Rebecca Ferguson) delivering a beautifully sung opera performance, despite her song sounding more akin to a Disney fantasy than a tune of the era.

Maybe I’m seeking too much out of a P.T. Barnum musical but there’s an artificiality to its sappy spectacle that just didn’t win me over, shooing away any deeper examination of his character. This fault is most prominent with the oddities he assembles for his show. He sells them on being the stars but will quickly push them aside when fancier parties are calling. What is the response of the bearded women and differently-sized attractions when Barnum denies their entrance into a party? They sing it off, waltzing back to the stage with the song “This Is Me” without raising a fury with Barnum. How could anyone hate Barnum in this musical that portrays him as nothing less than a beautiful dreamer?

It’s a frustrating experience to watch as the film bobs and weaves past any darkness that may sour its whimsy. Barnum has a bitter relationship with his in-laws that leads him to throw his wealth in their face. Cut away before he breaks down in an emotional huff. Barnum has a big problem with spending money he doesn’t have. Cut away before we start questioning his unsound means of building up his finances. He spends an awful lot of time on the road, neglecting his family. Quick; cut to him riding an elephant home for his kids!

While I can’t deny that The Greatest Showman boasts some solid musical numbers, it never rises past a typical glaze of Hollywood wonder on a showy biopic. The enjoyment depends entirely on how much you can distance yourself from Barnum’s life and be swept up in the spectacle of it all for the music, costumes, and charms of Jackman and Effron. I guess I’m just not one of those suckers born every minute.