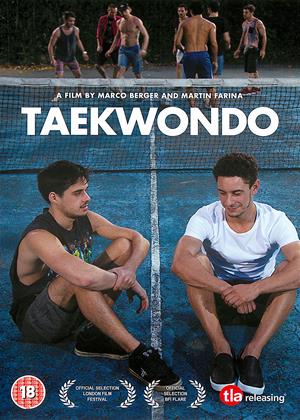 Synopsis:
Fernando (Lucas Papa) is on holiday with his closest friends in a beautiful country house in a chic suburb of Buenos Aires. Without the presence of their girlfriends the boys are eager to talk about their deepest feelings, their sexual desire for the girls, their fear of the future- and their conflicts. Disconnected from the outside world, they do little more than bask in the hot sun, play in the swimming pool, smoke pot and drink. As in all men only situations, they feel free to walk around naked or half-naked, being in such intimate proximity to each other. In that context, Fernando decides to invite a newcomer, German (Gabriel Epstein), a close friend from his Taekwondo class.
German is quickly by initiated in to the group, but also has a preference that Fernando ignores - he is attracted to men. Little by little the two friends get closer and more intimate, verging quickly on romance. Bringing a kind of potent sexuality in this totally bro environment, they need to decide whether to be explicit about it or not. Brimming with overwhelming sexuality throughout its entire running time, 'Taekwondo' is steaming with eroticism and lust.
Actors:
Gabriel Epstein, Lucas Papa, Nicolás Barsoff, Francisco Bertín, Arturo Frutos, Andrés Gavaldá, Juan Manuel Martino, Darío Miño, Gaston Re
Directors:
Marco Berger, Martín Farina
Producers:
Marco Berger, Martín Farina, Verónica Argencio
Writers:
Marco Berger
Studio:
TLA
Genres:
Comedy, Drama, Lesbian & Gay
Countries:
Argentina

Rather annoying! - Taekwondo review by TB

This film left me feeling pretty annoyed and wondering what the actual point of the movie was. The first 2/3 of the film seemed to have no storyline whatsoever and was just the director putting together lots of shots and angles of the male torso and genitals. It wasn’t until the final third of the film that a somewhat simply and obvious story started to take hold but just as it was working towards a possible crescendo, the film had a sudden finish. It left me underwhelmed as the film could have been structured much better to spend more time on the developing story a lot sooner and to give a better and proper ending. Disappointing!!

Marco Berger (‘Hawaii’) and Martín Farina (‘Fulboy’) come together to give you the ultimate male relations experience incarnated in, yours truly – Taekwondo. This film perfectly captures the beauty of the male body as if it was some kind of a form of art; this doesn’t mean however that it isn’t a gay film, because Taekwondo pretty much fits that description right off the bat. What Taekwondo isn’t however, is a character study into the minds of those who seek out such relationships, which is not a bad thing on its own, but we’re late overdue for such a film. Thus, for what it is, Taekwondo would most likely find its core audience and will roll with it until a new film with a male-to-male premise gets released.

The film sees several male friends cramped together in a nice family house during their summer breaks, in which the film’s protagonist (if you can call it as such) Fernando (played by Lucas Papa) invites over a friend from his Taekwondo lessons named Germán (portrayed by Gabriel Epstein). This is the main premise of the film, as Fernando wonders if Germán would ever come out to him, but starts to doubt if his friend is gay anyway.

Obviously, the film has its flaws, which are mainly presented through co-director’s Farina love for close-ups of male body parts; plus, there are some continuity errors in the film, like for example when one of the rare female characters disappears without a trace (or an explanation), or the time towards the end of the film when there is a sudden appearance of a pet dog. All things considered and for what it is, Taekwondo is a competently made film that probably won’t win any awards, but will serve its purpose after which it’ll fade into the cosmos in a beautiful explosion of stardust. But I digress.

The main flaw of the film is not its continuity errors, but rather the pacing problems which become apparent sometime towards the last third of the film. This drags the story (if there ever was one) and unnecessary extends Taekwondo’s running time for all its worth. On a more positive note however, the actors are pretty convincing in their perfectly mediocre, sometimes offensive dialogues, but this comes off as not nearly the perennial dialogue that would win you over in an instant. What I’m trying to say is that the screenplay does its thing, but it’s unforgettable for the most part.

Finally, one could say that Taekwondo is a perfectly serviceable film that would satisfy the appetites of the demographic that it’s aiming at. i.e. the male homosexual community. Other than that, there is no real reason to see this movie whatsoever.