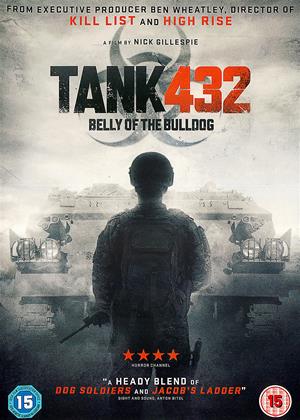 Synopsis:
On the run and with nowhere to hide, a group of mercenaries find themselves surrounded by an unidentified enemy. The only chance of survival is to hide inside an abandoned tank discovered by inexperienced soldier, Reeves (Rupert Evans). Once holed up inside the tank, they quickly discover the hatch is jammed leaving no way out. As the mercenaries begin searching for anything that may aid their escape and they struggle to keep forces outside at bay, little do they realise the real enemy is already amongst them, locked inside Tank 432.
Actors:
Rupert Evans, Steve Garry, Deirdre Mullins, Michael Smiley, Gordon Kennedy, April Pearson, Tom Meeten, Alex Rose March, Georgina Beedle
Directors:
Nick Gillespie
Producers:
Finn Bruce, Jennifer Handorf
Writers:
Nick Gillespie
Aka:
Belly of the Bulldog
Studio:
Kaleidoscope Home Ent.
Genres:
British Films, Action & Adventure, Horror, Thrillers
Countries:
UK

Beginning in bleak surrounds, and caught in a situation that only gets bleaker, this has similarities with the excellent ‘A Field in England (2013)’, except roundheads are substituted for soldiers. Whereas that film featured the talents of Julian Barrett, this features Tom Meeten (as Evans), both having starred in the mighty ‘The Mighty Boosh (TV Series, 2005-2007)’.

Whilst the lads are either losing their temper, their sanity or the contents of their stomach, Karlsson (Deidre Mullins) remains calm and collected. As events escalate, the squad, and Annabella (April Pearson) take refuge in an abandoned tank.

This is written and directed by Nick Gillespie (who appears briefly towards the end) and executively produced by Ben Wheatley. Wheatley in particular is a name I look out for, having proven to be a very interesting name in cinema.

The ending is as strange as the story itself, leaving itself open for interpretation.