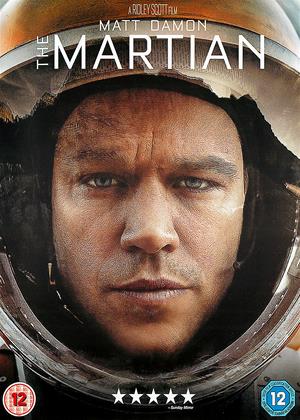 Reviews (17) of The Martian

Amazingly, given its box office success, I came to this film knowing very little about it, so here's a selection of reactions:

- a fine first half, much wittier and more interesting than one would expect

- a less fine second half, when the Hollywood juggernaut syndrome took over and the believability factor plummeted

- a nice, nuanced performance from Matt Damon, everybody else more or less a cliche or cypher

- a very convincing portrayal of the Red Planet, CGI put to excellent use

So, overall, a reasonably successful effort that certainly works well 70% of the time, let down though by the things that are so often a problem in modern, US big budget movies that have to be "exciting", "emotional" and ridiculously gung-ho patriotic to boot.

Stands up well - The Martian review by Champ

I saw this film at the cinema when first released in 2015, and loved it. Since then I have read the book, which is also excellent, and I was interested to see how the movie stood up a few years later.

And the answer is - it stands up very well indeed. There's some very good hard science in it, which it revels in instead of dumbing down. Sure it, takes some dramatic licence - after a character says that each message takes minutes to round-trip, people are then seen communicating as if in real time. But I can forgive it that.

Matt Damon is truly excellent, and I love the way he, and the film, play some scenes for laughs. The rest of the cast is a little mixed - while some of the supporting characters are excellent (Benedict Wong and Chiwetel Ejiofor stand out), others, such a Sean Bean, are more than a little wooden. But the film is good enough overall that it can stand a few lines of stilted dialogue, poorly delivered.

I also have to mention the movie makes Mars looks. This is reason alone to watch this on blu-ray! I never wondered how they did it, I just marvelled that it genuinely felt like Matt Damon was on Mars.

And if you really like the science in this movie, then I can highly recommend the book :-)

Good film with real science - The Martian review by AB

Nice to see real science being used properly regarding feeding, oxygen, water etc. Some of the fine details were skimmed over in the film (cf the book, which probably had *too* much detail). The last few scenes were very good - emotionally draining in fact and I found myself getting very emotional about it all, with a lump in my throat. It is also believable that the world (ie all nations) *would* get together to help someone in Watney's predicament.

After the wonder of Alfonso Cuaron’s Gravity comes the procedural plod of The Martian. Matt Damon is stranded on Mars. Will he get off alive? What do you think? The trailer gives nearly all the plot away anyway. It’s hardly a spoiler to say there’s an excruciating happy-clappy ending.

The film of course looks great but, weighing in at over two hours, it’s literally brought down to earth by tons of boring expository dialogue back at NASA and endless painstaking references to mission time constraints. Damon’s efforts to eke out his supplies also begin to pall. It turns out that DIY in space is no more interesting than it is on earth. Who’d have thought? (Anyone who saw Ron Howard’s Apollo 13, that’s who.) For marketing reasons there are also some blatant pro-Chinese scenes that stick in the craw like product placement. And to make things worse, it all plays out to a soundtrack of old disco muzak.

Ridley Scott has made some great films but is due a return to form. This isn’t it, but cut out 30 minutes of boffin speak and there might be an interesting film trying to get out here.

Ridley Scott back on form - The Martian review by PC

This could be a very dry version of Gravity on Mars but the script is so sharp and surprisingly funny that it rolls along at a good pace. Matt Damon is superb and the effects are excellent, but you will laugh and learn quite a lot from it as well.

Better than expected - The Martian review by GB

I loved this film especially as there were comedy elements to film I did not expect with the storyline.

Matt Damon was excellent in the role, think I'll be adding this to my collection.

Good story worth watching - The Martian review by gazmb

A very well made film. With a very good story about an astronaut that is stranded on Mars. Having to survive up there until there can be an attempted rescue.

Is this what they call pseudo realism or is it something else? - The Martian review by MD

The shots of Mars and the effects are nicely done, but the rest of the film does not match up to it.

A Mars a day helps you Work ,Rest and Escape the Planets Gravity ! - The Martian review by porky

Much Better Movie than I was expecting, Entertaining, Surprising and rather Touching .

Lots of Action ,Plenty to Root for and a ' Will he ,Wont he' ending that keeps you gripped.

I liked it very much after thinking it might just bore me to sleep ,which it certainly did not . Thumbs Up !

A great movie - The Martian review by DH

Yes there are holes in the plot but it is science fiction so you have to accept them. This is a great movie, well acted by Damon, very enjoyable.

Ridley Scott’s theatrical adaptation of Andy Weir’s intricate sci-fi novel may be his most accessible film. He doesn’t attempt to stage a deeper meaning towards the survival of one man on Mars or crowd it with cryptic symbolism. The strength of Scott’s The Martian is that he plays it straight and accurately - rarely slowing down for a moment without wonder, drama or humor.

It’s a simple story of survival in which Mark Watney (Matt Damon) is left behind during a storm on Mars. His crew have left the planet believing that Mark has most likely bit the red dust. All alone on a deserted planet, Mark is forced to rely on the left-behind resources of his crew to keep himself alive. He grows potatoes in his make-shift greenhouse to maintain a longer supply of food. He seeks out communication parts to see if he can contact NASA. And he does his best to maintain his sanity when his limited means of entertainment is music from the 1970’s.

It’s clear there was a lot of research that went into both Weir’s writing and Scott’s direction - both applying suggestions and insight from scientists. Weir slowly formed his novel through online critiques by those in the field while Scott worked with NASA to deliver a believable movie that mostly takes place on Mars and in space. If I had read the novel or chosen a more fruitful degree in science, I could probably spend this entire review picking out what the movie nailed or missed in either the screen translation or scientific logic. Ultimately, not much of that would matter if the film wasn’t entertaining.

The amazing news is that Ridley Scott delivers on a sci-fi picture that is equal parts hard science and emotionally engaging. You may not be able to pick up on Mark’s quick thinking and reasoning as it happens on Mars, but you can relate to his frustration and cocky nature over his predicament. Though Mark is capable enough to survive on Mars, he is not above boasting about his success to the camera about how he’s better than Neil Armstrong. In that sense, The Martian is most easily pitched as a sci-fi version of Cast Away with the addition of hard science thrills and subtraction of any volleyball for Matt Damon to converse with.

The cast is all-around brilliant. While Matt Damon pulls an impressive performance with his one-man-show on Mars, the characters on the space station and back on Earth are all fantastic. Jeff Daniels commands an insightful presence as the director of NASA, calculated among the public and impatient around his staff. The staff placed in charge of saving Mark include the likes of Kristen Wiig, Michael Pena, Kate Mara and Sean Bean. This is quite the ensemble and yet there seems to be just enough for everyone to do as they all form an essential role in bringing home the lost astronaut.

Special effects have never been a problem when it comes to Ridley Scott movies and he applies a great deal of realism to the details of this story. Matt Damon’s trek through Mars feels like we’re on the red planet. The space station of the away astronauts has a believable quality on the level of 2001: A Space Odyssey. But unlike Kubrick’s space adventure which chugs along at a snail’s pace to take in the wonders of the universe, Scott’s picture is fast and focussed. It does become maybe a little too intricate in how various degrees of scientists and directors are pulled into the operation, but never too dense in that it avoids becoming a confusing mess of politics and technicalities.

The Martian may not be Ridley Scott’s greatest or most perplexing of films, but it certainly is his most entertaining picture that is easily recommendable to all audiences. It’s simple enough to enjoy on a character level and intricate enough to please the most scrutinizing of sci-fi fans. Everything about this film is a knockout from the performances to the special effects to the writing - all operating at peak efficiency. Who would have thought that a capable space adventure could be conceived without the need for aliens, space battleships or forced in elements of emotion. If Christopher Nolan’s Interstellar was a modest attempt at blending sensational entertainment with space exploration, The Martian is the real deal.