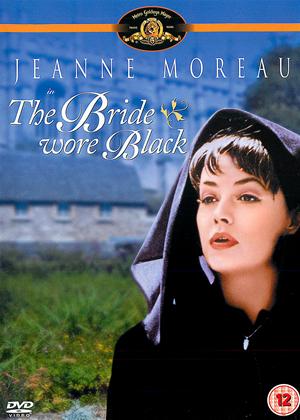 Synopsis:
Julie (Jeanne Moreau), a beautiful young bride, has just married her childhood sweetheart and love of her life. But just moments after the ceremony, her beloved is murdered on the steps of the church. Emotionally distraught, Julie becomes obsessed with her bridegroom's death and begins a descent into madness as she relentlessly pursues the men responsible. One by one, Julie sees to their demises, and, with each murder more bone-chilling and diabolically clever than the last, the question is now who will be next - but rather how they will meet their ghastly end.
Actors:
Jeanne Moreau, Jean-Claude Brialy, Michel Bouquet, Charles Denner, Claude Rich, Michael Lonsdale, Daniel Boulanger, Alexandra Stewart, Sylvine Delannoy, Luce Fabiole, Michèle Montfort, Jacqueline Rouillard, Paul Pavel, Gilles Quéant, Serge Rousseau
Directors:
François Truffaut
Writers:
Cornell Woolrich, François Truffaut
Aka:
La Mariee etait en noir
Studio:
20th Century Fox
Genres:
Drama, Romance
Countries:
France

Reviews (3) of The Bride Wore Black

Revenge is . . . what? - The Bride Wore Black review by RhysH

The plot has a charming ingenuity but its execution is somewhat stultified and inconsistent. Although it centres on revenge murders it really is not "noir" enough. Cinema Paradiso place it in the Romantic Dramas genre so maybe I am missing the point of the style of the film. It does have an amusing air but wears it very thinly.

Jeanne Moreau is very watchable as Julie Kohler the killer, she plays out each murder with an air of studied insouciance.

Not French Enough - The Bride Wore Black review by NC

With such a story, and such a cast, under a renowned director, this should be a great watch. What a shame it isn't - it just ends up being one of those films that are 'not bad'.

The script and the structure are too loose. There is no tension created in the build-up to each execution - on the contrary, a couple of them seem to drag. And there are loose ends and improbabilities galore

Maybe Truffaut was trying to ape Hitchcock and shoot for an international market, I don't know. He should instead surely have learnt from the great thrillers and films-noir made in France from the '30's onwards. Trying to be all things to all people usually ends in being stretched too thin.

Jeanne Moreau is, of course, mesmerising. No wonder Orson Welles called her the greatest actress in the world. There's support from a gallery of top actors, including the consummate Michel Lonsdale. But it's a hopeless task to impress with such a script and unimaginative direction.

I've always considered Truffaut overrated. I cannot for the life of me see why 'Jules et Jim', 'The 400 Blows', and 'Day for Night' are raved about so much. 'The Bride Wore Black' serves to reinforce my opinion.

By the way, if anybody thinks the French male in the era the film was made (1967) was sexist and misogynistic, then the belief will be confirmed.

A Pretty Conceit - The Bride Wore Black review by NW

I understand that the critics thought poorly of this film and that Truffaut himself came to agree ... though the plot is an amusing enough conceit and Jeanne Moreau plays beautifully throughout. The flaws, however, are glaring: the murder methods, for example, are so chancy and unreliable as to be practically infeasible; the first twenty minutes or so of the film drop so many puzzling hints with so many logical jumps as to be simply muddling: a sort of logical inadequacy seems to run through. Visually, also, the filming is pretty enough, but somehow struck me as no more than humdrum ... a film you can enjoy watching - well performed - but which leaves an annoying emptiness behind. Of course, I have not read the original book, but my impression is that Truffaut constructed a workaday presentation of its key ideas and scenes but has only cursorily bound them together into a coherent whole. He has not taken the film beyond the bones of the plot, leaving logical lacunae and inconsistencies: hence an empty feeling of slight dissatisfaction.

And yet ...almost … forget the much of the above. In the last twenty minutes everything sharpens up: the earlier flaws remain, but the finish is a climax like a bugle call ... the Sick Call or the Last Post, perhaps.