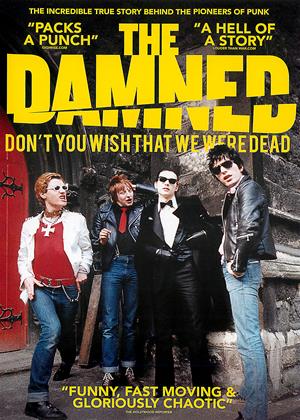 Rent other films like The Damned: Don't You Wish That We Were Dead

Reviews of The Damned: Don't You Wish That We Were Dead

The Damned: Don't You Wish That We Were Dead review by Adrijan Arsovski - Cinema Paradiso

The Damned: Don't You Wish That We Were Dead

The Damned: Don't You Wish That We Were Dead is a comprehensive “blast”, starting all the way from the past and landing its story to the contemporary present. This film is an extraordinary take at one of the most under-appreciated, lesser-known, hidden-genius bands perhaps of all time, which makes it that more esoteric both for viewers familiar with the band – and those uninitiated as well. In fact, this crudely accurate feature by Wes Orshoski may very well earn him a place among the other big documentary directors of our time, including Herzog, Moore, and many more.

The Damned were an erratic pile of mess right from the get-go: their unusual, pseudo-hippy lifestyles earned them what can be called a misunderstanding from those outward looking into the groups’ various blows and mischances. These mischances (and subsequently their eccentric behaviors) are perfectly summed up by Jerry Lee Lewis’ eerily anarchistic response: “I did what I wanted.” Then again, the band lived by pushing their own – and each other’s philosophies – the farthest they could possibly go. Which eventually lead them to the brink of total and utter madness. And not madness in the sense of going crazy at certain moments in time: but rather madness as a life mantra that would put the most hardcore of anarchists to irreversible shame.

Today, The Damned still goes strong, although not with the same anti-vigor they had in their younger and more fruitful years. In fact, they are pushing the fortieth anniversary since their inception, with the two original members – vocalist Dave Vanian and guitarist Captain Sensible – still remaining at the band’s foundation to remind both themselves and others that retirement is only for the weak. And even still, these two continue to push the limits through bizarre and eccentric bursts of chaos and rebirth, physical and emotional disdain, and finally – anarchy of all things sacred (at least, according to them). And they also have some music of theirs to back the whole ordeal as well.

Their music is (and were) a crude mishmash between British punk, progressive rock, psychedelic punk-rock, and a tint of Goth rock; in fact, throughout the years, The Damned were dancing between multiple (although on the same side of the spectrum) genres both figuratively and literally into what culminates as an apocalyptic cover of a world famous ballad called Eloise. Some of the other songs are Neat, Neat, Neat (chord speed punk), Curtain Call (progressive rock epic), White Rabbit (psychedelic rock), Grimly Fiendish (pop), History of the World Part 1 (synth rock), and so on and so forth.

All things considered, The Damned: Don't You Wish That We Were Dead is a clinical take on a chaotic mess that was roaming the 70s alternative rock scene, and continues to do so even to this very day, dubbed as The Damned.