Rent Hunt for the Wilderpeople (2016) 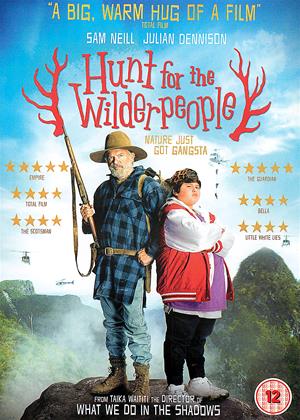 Reviews (8) of Hunt for the Wilderpeople

At times, this resembles one of those amateurish Children's Film Foundation films from the 1970s. This comes complete with dastardly carton character baddies (the police, child welfare officers, huntsmen).

It's basically a chase movie. So far, so cartoony.

However, the charm of the script + great acting + action lifts this above that. It's an enjoyable movie and great for anyone who wants to see the lush New Zealand landscape.

I do not believe for a minute that ANY social services in NZ or any developed country would behave like this or dump a child with a family consisting of two ex-drifters in the middle of nowhere. But the plot demands it.

Some comic scenes - very visual comedy. Some work, some don't. Some funny wordplay too.

So 4 stars despite the negatives.

Little NZ film - Hunt for the Wilderpeople review by NC

Nice to see fresh film with nobody you know. Done simply and well, with fabulous NZ countryside. Makes a pleasant change from the multi million pound re-hashes with known names that should know better.

Hilarious and moving - Hunt for the Wilderpeople review by EI

One of the most funny, enjoyable, un-PC films I've seen in a long time! I laughed loads, Sam Neill was as usual excellent in his role.

It reminded me of the good times I had tramping in New Zealand.

Kiwi class - Hunt for the Wilderpeople review by JD

After watching this film I immediately ordered a whole load of New Zealand directed films. Great scenery, very laid back humour, silly in bits but not too much, the main characters are really well crafted. Some of the supporting acting is a bit thin, difficult to say whether that was script or actor. Sam Neill of course is superb but Rhys Darby is laugh out loud funny.

Really funny, quirky - Hunt for the Wilderpeople review by ZB

I've recommended it to loads of people and we've all agreed its brilliant!

Brilliantly performed. - Hunt for the Wilderpeople review by LJ

Not sure at first if to continue watching but so glad I did. It touched on humanity and everyone deserves a chance regardless of past history. Just takes a brave soul to be up for the challenge. Great acting throughout. Such a change from the usual run of the mill politically correct film and with a sense of humour throughout.

At last a great family movie for everyone to enjoy! - Hunt for the Wilderpeople review by CS

I'd never heard of this film but was pleasantly surprised when I watched it, I thought it was a great family movie, really fun and enjoyable to watch, with a great message of honesty, truth and what family truly means! In an age where we are oversaturated by bland over the top, badly made action movies, it's refreshing to see something which is just plain fun, lot's of laughs, but lots of sad moments too. Parts of this made me cry, parts laugh, but it was really touching too. The script and direction are top notch. as is the fantastic cinematography which shows the most beautiful of New Zealand landscapes at it's absolute best. The acting is superb by all concerned, but Sam Neill and his relationship with the young boy really develops and the young lad playing the part really shines through in the end! I can strongly recommend this to anyone who enjoys a good back to basics film about life and it has to offer!

Worth a watch - Hunt for the Wilderpeople review by BE

After the demise of his foster mother, child and querrellous foster dad try to overcome adversity after leaving the homestead. Quite a few scrapes along the way cause anxiety and merriment in turn, leading to a bonding of souls. Very natural acting which takes place in glorious NZ scenery. Julian Dennison excels as the foster child in a lead role.

Hunt for the Wilderpeople review by Adrijan Arsovski - Cinema Paradiso

In an ocean of superhero over-saturation and explosions galore, Taika Waititi's Hunt for the Wilderpeople comes as a refreshing, albeit all-too-familiar story about how a boy and his quirky uncle beat all odds to finally bond like they’ve supposed to long ago. Think Pixar’s Up, with Sam Neill as a grumpy old man and Julian Dennison playing a kid always hungry for more knowledge and adventure – meets Big Daddy halfway in a feature for both teens and adults to enjoy. Hunt for the Wilderpeople just brims with honesty and soul.

Director Waititi already showcased his talents with his previous feature named What We Do in the Shadows, where he employed a mundane approach to a narrative subject as old as time – vampires. This time, his talents took a turn toward and away from the supernatural, in the form of a family comedy drama about a boy and his uncle on a run. Interesting to note is, as both films very much differ in theme and motifs, their underlying message still manages to remain the same. And it reads ‘honesty prevails at the end, no matter how hard the journey has been and what perils were overcome’. Always nice.

The story is a straightforward hero’s journey from point A to B, with few twists and turns along the way: but even then it surprises how it still manages to stay mostly human. And typical like all journeys the hero embarks on, Hunt for the Wilderpeople loves its antagonists which are somewhat subverted in their appearance as the ‘ones who’re supposed to save the day’. Instead, their main goal is to break the unlikely ongoing bond between an illiterate vagrant and a rebellious young man, which they deem as unacceptable by any and all means on their disposal. Whether they succeed or not, is left to be seen.

Hunt for the Wilderpeople is an ambassador for New Zealand’s vast untouched landscape which brings joy even to the cruelest of hearts. The soundtrack is carefully picked and gives away that ethnic feel of nostalgia and yearning for a life in the countryside free of technology and modern distractions. Quickly it becomes clear that our heroes’ journey leads the unlikely rag-tag duo to battle the most dangerous predator of all: nature.

Also, thanks to Sam Neill, his newcomer co-star Julian Dennison is able to show a full spectrum of emotions that make the whole ordeal even more plausible than (I guess) director Taika Waititi has envisioned his project in the first place.

To conclude, and one can say that Hunt for the Wilderpeople is a must see for everyone who’s an uncle or plans to become one in the foreseeable future.