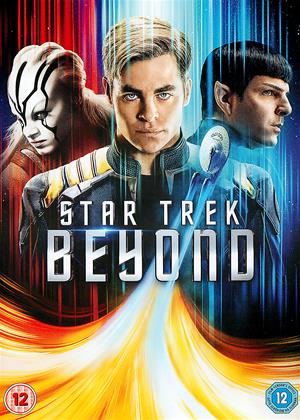 Reviews (11) of Star Trek Beyond

Once again a Top Movie for the Start trek fans! - Star Trek Beyond review by CS

I actually found this a really enjoyable film to watch, in fact so much fun that I watched it twice! Whilst the storyline offers nothing new, it is simply a re-tread of the standard trekkie stories, this film brings something fresh ad exciting to the series. It's great how the actors not only play the characters, but the actors who played the characters originally as well, but in a very strong and honourable way. They really gel as a team and that is part of the films strength, is the way the actors all work together, no egos here vying for attention, just a well thought out, well scripted, acted and directed film, with some great special effects and edge of the set thrills! A real credit to the series.

I enjoyed this film and it was action packed but i didnt find it as good as the last two movies. The plot was a little far fetched even by Star Trek standards but the cast where good and film was well made.

Its impossible for any Star Trek film to disappoint, and true to form this latest instalments delivers!

Even though the story line is very predictable, as is always the case with Star Trek (after all Star Trek has been boldly going for several decades now) the characters have got even more interesting and plenty of amusing moments in this film making it an incredibly engaging watch, its hard to imagine the film is 2hrs long.

The only reason I'm holding back on 5 full stars is that Star Trek has earned a creative licence to really push the limits and create opulent worlds or thought provoking worlds, and it would be nice to see a little bit of that come back into the films.

Watch it again in 12 months? Absolutely!

This the best yet in the rebooted series, with some impressive space station and planetary designs. There’s even a great opening, with Kirk in voiceover contemplating life in space. But we’re soon back to the usual Star Trak clichés, of which you’re either a fan or you’re not. Unless you’re a Trekkie it’s neither funny enough nor thrilling enough..

Director Justin Lin does a good job with the lightweight stuff at his disposal but can do little to inject much life into affairs as the film degenerates into the usual catalogue of explosions. At least these are better than Independence Day Resurgence explosions but that’s not saying much. As for the climactic fight between Kirk and miscast baddie Idris Elba, it’s a damp squib.

The plot advances through one contrived confrontation after another. Each character’s predicament is given an update before we move on in piecemeal style to see what’s happening elsewhere, making it less involving than a good episode from the original TV series. Amazingly, each of our lovable characters is nearly but not quite get killed, while the usual dreadful cartoonish orchestral score highlights every beat.

It’s about time someone brought some imagination and depth to these films. This one is popcorn stuff for pre-teens.

Enjoying the Star Trek films but need to get more solid story's. I would of liked it to be set in the Kirkby universe instead of this one. They need to stop being able to land or take off from planets with the main ships , that was the whole point of beaming down or using a shuttle craft it couldn't be done in the main ship.

There is nothing hugely wrong with the film, apart from the fact it does not move any of the characters beyond the second film. It feels more like a single episode of the series, albeit with a much larger budget. It was funny in places but the action scenes felt borrowed from other films and Idris Elba seemed rather swamped as the bad guy in all the make-up. It was fun but I hope a new director and direction for the next one.

Good, but not as good as the last film - Star Trek Beyond review by HH

Very entertaining and certainly worth a watch, but it's mostly a fight from start to finish and I'd have liked to see a bit more plot development and back story before the explosions started. Credit must go to Zachary Quinto who is a great "Spock", but although I love Simon Pegg usually, I can't believe him in this role.

OK but no more - Star Trek Beyond review by AM

Bit too long, no real plot just a lot of fighting. Good special effects tho but think its getting a bit tired.

Very much prefer the old school cast!! - Star Trek Beyond review by MR

Not much of a story in these latest Star Trek films but plenty of action nonetheless. For me personally I much prefer William Shatner and co and also Patrick Stewart and co as captains and I don't think no Star Trek film will ever beat Star Trek the Voyage home film from the 1980!!

To be honest, I have never been a huge Star Trek movie fan. The original TV series is great as ever and repeated every weekday 6pm on the Horror Channel I think?

Shatner still out there in the galaxy somewhere, bless him. Fun guy. If like the Treks then will like this. If you don't.............you won't. Watched the original series on TV, so, although not enthusiast, do quite like the colour and light thing.

Would probably given someone Manhattan for a few glass beads. Alas someone years ago already did that.....now we have Donald et al...............

Star Trek Beyond (aka Star Trek: Beyond) review by Mark McPherson - Cinema Paradiso

This is very much the Star Trek picture everyone has been waiting for from this fresh, young crew. Past the soft rebooting and needless amounts of nostalgic winking, the ensemble of the USS Enterprise can finally do their own thing on that five year mission they kept talking about it. There’s no shameless insertions of obvious references and no shoehorned cameos by the original Trek crew. For the first time, the new Trek has taken off the training wheels and ready to become its own original picture.

Star Trek Beyond actually begins by both tying up loose ends and weaving their effect into the characters. With Leonard Nimoy’s passing, the old Spock is revealed to have been killed off. When the new Spock (Zachary Quinto) learns of this news, he’s stricken with coming to terms with his own mortality amid his breakup with Uhura (Zoe Saldana). Captain Kirk (Chris Pine) faces a similar dilemma, realizing he’s reaching the same age his father was when he was killed in combat. The characters are built up so well that impending action sequences actually have a little more emotional investment behind them.

The driving plot for the action is nothing all that original, but fitting for Star Trek. The Enterprise is called upon for a rescue mission of a downed vessel on the planet Altamid. When they arrive, they are greeted by an ambushing swarm of alien fighter craft that attack and board the Enterprise. Forced to abandon ship, the crew escape to the surface of Altamid and must regroup to take down this new threat to the Starfleet Federation. The leader for this angry group of white-colored aliens is Krall (Idris Elba), a no-nonsense villain with typical intentions of assembling a doomsday device. He appears to be another atypical antagonist until the third act reveals his more sordid history with the Federation and his reasoning for desiring their destruction.

Despite being another action-heavy scenario for the Enterprise crew, still distant from the more challenging episodes of the original series, there’s some great moments of character development that appeared to be lacking from previous pictures. As opposed to just finding something for every character to do, there is more family element present as the Enterprise crew deal with conflicting relationships. Unlike Star Trek Into Darkness which banked hard on blunt callbacks, Beyond makes much more subtle references to Wrath of Kahn. There’s a scene where Kirk speaks with Bones about coming to terms with his age that likens back to the Wrath of Kahn scene where Bones delivers Kirk a birthday present of eye-glasses. Both of these powerful scenes are of similar themes, but handled with different tones and emotions. As the original Kirk feared himself getting too old, Chris Pine’s Kirk fears he won’t live long enough to see old age.

These actors are all at their best in what is easily the best entry of the new Trek ensemble. Chris Pine really comes into his own as Kirk as opposed to his usual mugging and cocky attitudes of the previous Trek movies. Zachary Quinto feels more comfy in the role of Spock in how he has more chemistry with the Karl Urban’s Bones character. Even John Cho and the late Anton Yelchin have a little more on the line in this struggle as we get to know more about them and their families. For as much makeup as Idris Elba has caked on, he still delivers a solid performance that becomes much more than snarling and growling.

My only real qualm with Star Trek Beyond is in its special effects which range from spectacular feats to lackluster. The doomsday device is nothing that special as it appears to just be a mass of black particles that devour whatever they touch. Thankfully, more of the budget was put towards the stunning destruction of the Enterprise and a thrilling chase through the fluctuating gravity of a Federation colony. The finale in particular is one of the most unique Trek moments for this trilogy.

Though still an action blockbuster, refusing to become a more thoughtful piece of science fiction in its current tentpole format, Star Trek Beyond still has enough thrills, character and creativity to succeed as its own thing. It’s the closest that current Star Trek will come to echoing the original series without just shoving in references amid starships exploding. The series is finally starting to go boldly where no Trek film has been in quite some time.