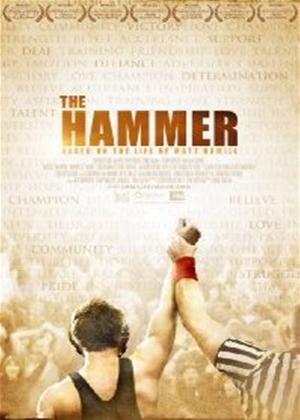 Not released
An Unmarried Woman

Reviews of The Hammer

There are only a handful of movies that would star hearing-impaired actors. Marlee Matlin won an Academy Award for her performance in ‘Children of a Lesser God’, and then recently there’s Rinko Kikuchi, an actor playing a deaf-mute in ‘Babel’. In ‘The Hammer’, a biopic on former UFC champ Matt Hamill, Russell Harvard is the real deal; like Marlee Matlin, he is hearing impaired but he delivers in this interesting movie.

‘The Hammer’ is your typical Cinderella story, although it involves an unlikely subject – a hearing impaired athlete. Russell Harvard as Matt Hamill gives a sincere and conflicted performance, mirroring the real-life struggles of Hamill. The mix martial artist Hamill was brought up by his mother and a very tough and overbearing grandfather. Knowing that Hamill cannot hear or speak, his grandfather instilled in him a personality that doesn’t take crap from anyone. As a young kid, Hamill was already told that no one will give him allowances just because he has an impediment. One of the most controversial decisions his grandfather made was only teaching him to read lips and not learn how to do sign language. All throughout Hamill’s life up until he started wrestling in college, people thought he could actually hear. Imagine a life where you had to blend in – only in reality, you don’t.

‘The Hammer’ is also an ‘outsider’ story; it feels like Hamill is someone outside looking in. His fighting skills is unparalleled, that’s a given, but he is also a loose cannon. Without a proper mentor to rein him in, Hamill is a hothead with serious issues. It’s a nice touch that the film makers decided to put Hamill’s thoughts in subtitles instead of the usual narration. However, don’t expect ‘The Hammer’ to be quiet; it’s anything but.

Overall, ‘The Hammer’ is a full-on biopic with a typical plot development of beginning, middle, and end. If the movie was released during Matt Hamill’s heyday in the UFC and MMA community (he has been retired for a while), an interest in the badass deaf-mute guy would have been glorious. There goes timing.