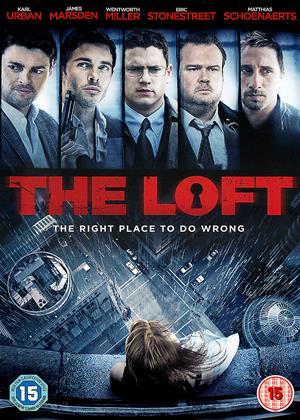 Reviews of The Loft

There’s something very disturbing about a film when you can feel it channeling something on the level of Very Bad Things. In that movie, a group of inept men try to bury the dead bodies that end up at their bachelor party with a disastrous aftermath. It becomes so mean-spirited and vile that any shred of comedy is lost in the script’s desire for dark comedy. The Loft plays in the same backyard. It creates characters that are hateable and a plot that is muddled in preposterous twists. This is the type of film where you have to have tunnel vision to block all these elements to focus on the erotic mystery.

The setup itself just screams trashy as five married men share a loft to secretly congregate with their mistresses. Having a sort of clubhouse for sex is a really terrible idea even if the five were incredibly trustworthy with each other. How do you determine who is going to use the loft when? Who is going to clean up after the messes they leave with each visit? Do they stock the fridge with anything? I ask only because this is a very decadent loft in an upscale building. Honestly, it might have made a decent comedy playing up the expected Odd Couple angle fused with The Apartment.

Instead of trying for dark comedy, The Loft goes for dark mystery when the five of them discover a blonde corpse in the bed. As they arrive one by one for the brutal discovery, they immediately go Reservoir Dogs on each other either furiously blaming, frighteningly cowering or nervously planning an out. While they all freak out about what to do next or who might have done it, the film whips around both the events leading to the corpse and the police interrogation that follows of the suspects.

I suppose we should be invested in the whodunit, but there’s hardly a character to root for in this plan of cheating gone wrong. Vincent (Karl Urban) is the mastermind of this scheme as the sleazy architect of the loft building. Luke (Wentworth Miller) is the creepy voyeur of the group, preferring to watch more often than act. Chris (James Marsden) is the reluctant doctor who would appear the most human if he didn’t end falling for a prostitute. Marty (Eric Stonestreet) is a fat pervert who constantly drinks. Phillip is the most aggressive of the group threatening anyone who decides to bring his sister back to the loft. These guys spend the entire movie on the prowl for women to hunt for use in their shared lair of debauchery. All of them appear deadly serious about this new aspect of their lives that I’m surprised they weren’t expecting a murder in the loft at some point.

But when it finally happens, do we really care who lives and who dies? They’re all terrible human beings that are never given a shred of decency in the flashback sequences. Without proper investment in anyone, why should I care about who was deceiving who or who was setting up who to take the fall? Am I supposed to be shocked about the alliances that are formed and broken in the name of revenge and sex? And what about all these sex scenes which pack the same amount of I-don’t-care? They may be erotic in their staging, but ultimately vapid in their direction for the story. After all, they don’t really love anybody they’re with. It’s all just spectacle as in a pool scene where the audience is given a full view of Karl Urban’s abs and Isabel Lucas’ butt.

The Loft is just plain empty. It’s a soulless experience of bad people doing bad things that become even worse with their idiocies. This is an erotic thriller where none of the sex has meaning and none of the plot is thrilling. The only admirable thing about this picture is the loft itself. It’s a great design with some nice choices in upscale decorating for such a joint. Why couldn’t the loft itself be the killer as a suite possessed by an evil spirit that kills off everyone who used this place for immoral acts of carnal delight? Then there would finally be a likable character in this mess.