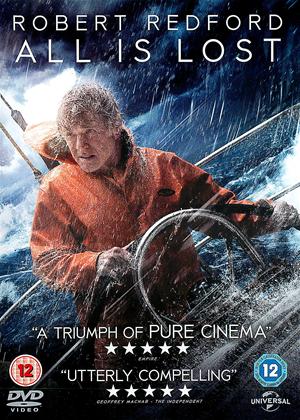 Strange, and Engrossing - All Is Lost review by Mehitabel

This didn't feel like a fictional story, but nor did it feel like a documentary. It was more like just... Being there. We watch Robert Redford's lone yachtsman face one peril after another. But there is no attempt to big up the incidents - they just... Happen. Nor is there any attempt to fake the pace. It's not real time, but there are pauses, and then breathless rushes.. Again, just like it would be in reality.

A far less imaginative approach would have been to fill the whole thing with facile, booming music and to give our (nameless) protagonist a sentimental back-story. And we would have seen him Reacting, big-time, to each set-back. But no. Yet despite not having our chains deliberately jerked as audience, we certainly do find ourselves really caring.. So that when... But that would be a spoiler.

If you like intelligent tales well told, drama without melodrama, and have any interest at all in the ocean, boats or people.. See this film.

Thrilling yet natural - All Is Lost review by PR

Plot: lone yachtsman faces one life-threatening disaster after another and tries to cope as best he can. That's it. Does this make a good film? Yes, it does, and a thrilling one at that! Because the film is so unforced, so natural, it is easy to be taken in and to share the anxiety and frustrations of the character. I deliberately do not call him "hero" because, thank goodness, we get no sentimental background stories, no far fetched physical prowess, just a man trying to get out of danger by keeping his head. As it is in real life when we don't have an audience to perform for. Extra points to the director for not trying to bulk up the film with mood-enhancing music and sweeping marine vistas.

An engaging film about the trials of a lone sailor. - All Is Lost review by Dai Bach

As a sailor myself, I could pick any number of holes in this film but I won't because, overall, the film brilliantly captured the atmosphere of being a lone sailor in a crisis situation. Robert Redford's acting was superb. He brought reality to the situation with his initial feelings of despair and helplessness before setting about getting to grips with the problems in an intelligent way. It's a pity about the ending, which was so implausible. It would have been more realistic if he'd been rescued from the surface rather than miraculously recovering at depth. Oh and just one piece of advice Robert, next time you go on deck in a storm, please put your washboards back in and close the cabin hatch. Leaving everything open is just asking for trouble!

A 1 word script - All Is Lost review by JD

This has a simple plot. A lone yachtsman has some bad luck then terrible weather then more bad luck. The only word throughout is an expletive said during some particularly bad luck. Some of the camera shots are dreamily beautiful some of the scenes are breathtakingly dramatic. Robert Redford acts very convincingly and I felt his frustration. As a one person cast though it would have been better to have a less famous actor not so type cast in very different roles. Some background to the character might have been good. It was good drama but lacked compassion.

Lost for words - All Is Lost review by CP Customer

Loved this film - one lone yachtsman against the sea and bad luck, hardly any words (Robert Redford played this character brilliantly, he certainly wouldn't have forgot his lines)

I found the music, and scenes amazing, expecting the character to go back to his memories, families, romances when he was at death's door but no, just kept simple, mysterious and for me compulsive viewing.

Strangely gripping - All Is Lost review by JP

Brilliantly conceived and executed. So unusual. You could pick holes in it; but in essence it was absorbing and fascinating without being particularly exciting. Acid test: not a great deal seemed to happen; but it was over before you knew it.

This is a film that was enjoyable for all the wrong reasons. I wish I'd seen it in a cinema with a bunch of other people so we could all have had a laugh together. A unbelievable pantomime of bad luck afflicts the unfortunate Robert Redford from beginning to end - from managing to drift into the path of a metal container mysteriously floating in the middle of the Indian Ocean, through to setting his life raft on fire in the final scenes. That had us rolling about in hysterics. Highlights included Robert pausing to have a shave whilst waiting for a storm to strike; a total lack of wind current affecting any part of the boat / equipment or Robert's personal attire during said storm; the spiky legs on the sextant on the inflatable raft just begging for an 'oops' moment; the life raft springing a leak anyway, and the script which, with the exception of a message in a bottle being read in the opening scenes (in which he sends his love to his family but forgets to say who he is) consists of a single four letter word beginning with 'f'.

My husband's favourite bit was when Robert manages to catch a fish - that's then eaten by a shark. I liked the shots of sea creatures beneath the boat best.

Wonderfully filmed - All Is Lost review by BM

I did not understand the beginning which I watched again. what was the shape that we saw, was it an upturned yacht? Was it after he abandoned the sinking yacht? I t was all so dark it was difficult to identify. I imagine any sailor would be fascinated with this film, the detail was amazing and totally watchable even to someone who had never been on a yacht. I did find the fire a bit far fetched for a man who seemed to be so capable. I don't mind an ending left to ones imagination but the beginning of the film left me frustrated.

After the initial speech, this film is almost wordless (a bit unrealistic because I think most people would be swearing a lot and talking to themselves in such a situation).

A chance collision with a container lost from a ship knocks a hole in the side of Robert Redford's boat. From there, the jeopardy is pumped up with misfortune piled on misfortune.

I would expect his survival kit to be better - but maybe they're like this (with but one fishhook and just 2 flares).

Anyway, it all gets very wet and miserable, until the end (which is the only part I disliked). Quasi-religious ambiguity isn't my thing really.

All in all, a watchable movie. Maybe not as good as Open Water, and clearly influenced by that. But still good. 3.5 stars

Dull, frustrating and slow moving - All Is Lost review by PW

My review title just about sums up this film. Save 102 minutes of your life by not watching it .... Had to watch part of it at 2 times speed as there was no dialogue so perfectly able to "keep up" while doing that so I only wasted 51 minutes ??

Well acted action film - All Is Lost review by ChrisB

Robert Redford was very good in this role but, as a previous reviewer suggested, another actor could probably have done just as well. It was an entertaining film and, if you could overlook the few 'sailing' flaws, was a good, simple story.

All Is Lost review by George Hooper - Cinema Paradiso

While nowadays we mostly hear about Robert Redford behind the camera it’s one of the few films he spends in front of it that seems to have the most impact. All is Lost is the ultimate survival tale with Redford giving a performance worthy of serious awards recognition even though he barely says a thing.

The film follows an unnamed elderly man sailing across the ocean until his boat is damaged by a floating shipping container. What starts off as a small problem quickly becomes something much worse when it starts a chain reaction that could easily leave him stranded in the middle of the sea. Using his skills and expertise he must try to stay on top of the many problems he encounters if he wants to stand a chance of getting to land safely.

Directed by J. C Chandor as his follow up to the remarkably verbose Margin Call, All is Lost is an exercise in everything technical, from the shots Chandor uses to the way Redford portrays his silent protagonist, the film is all about form with Redford and Chandor making a fantastic pairing. The film’s grueling shoot only adds to Redford’s stellar performance, a mixture of desperation and fortitude.

The other character to mention is the ocean, a creature with a mind of its own intent on destruction through abject beauty. The man’s connection to the ocean screams everything you need to know about his family, his life and how he needs his isolation just as much as he loathes it.

The films main story may be one of unending optimism and survival but Chandor cleverly fits in plenty of other themes to treat viewers like the corruption of our planet by man as well as the disconnect we all experience from a now semi-automated world as the man finds himself alone in much the same way anyone can be, even if we are surrounded by people. All is Lost isn’t just a title, it’s an opinion, one the film hopefully encourages and dissuades against at the same time