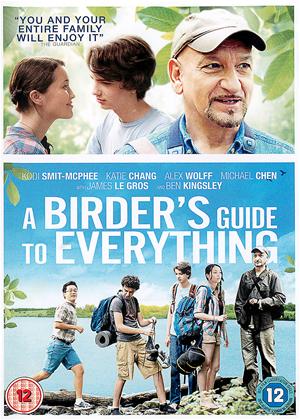 Rent other films like A Birder's Guide to Everything

Reviews (1) of A Birder's Guide to Everything

Film is rated as a 12, plenty of swearing and sexual innuendo, I will certainly take more note of the classifications as from the blurb I thought this would be appropriate for my 10 year old bird loving daughter. I was wrong.

Good moments of chemistry between the main 2 actors, showing their friendship blossom and grow. The plot line of finding the rare bird was really stretched to the extreme, with drug gangs, other birders and a calamitous roadtrip all helped fill the 1 hour 20 mins.

Without all the swearing, it would actually make a decent 'Disney' type childrens film.

A Birder's Guide to Everything review by Alyse Garner - Cinema Paradiso

A lovely, strange and character driven coming-of-age comedy drama A Birder’s Guide to Everything immediately caught my attention because, in so many ways, it reminded of the films of my own youth; the awkward and seemingly low budget sort-of adventures where quaint, tongue in cheek or occasionally fantastical metaphors stand in for the horrors and wonders of lust, sex and the ever changing teenage body. Perhaps it was this evocation of remembered emotions that drew me so much to Birders but whatever it was I found it charming and entertaining from start to finish.

The story follows David (Kodi Smit-McPhee), whose deceased mother had introduced him to the joys of “birding” (bird watching to outsiders such as us) before her death; now, on the eve of his father’s new marriage, David finds himself obsessed with spotting a duck that has, for some time, been thought extinct but may in fact be hiding out in his very backyard: the Connecticut woods. Bringing his similarly bird obsessed friends with him David convinces the resident girl geek and photographer Ellen (the Bling Ring’s Katie Chang) to venture into the woods in search of this mystical bird.

The narrative is full of awkward and painfully familiar incidents in which the gender differences – which at that point in life all seem so terrifying – come colliding together, personal secrets and as-of-yet undiscovered global truths emerge and all the characters take big steps forward in their adolescent development.

It may be a very neat and straight forward film, some may even call it obvious, but there was something sweet and fresh about A Birder’s Guide to Everything, the roles are all well played and their characters just deep enough to hold your attention for the film’s moderately short run-time and though it may not reach the heights of the Goonies or even the love-hate cult status of Clueless there is something about A Birder’s Guide to Everything that I could not help but love.