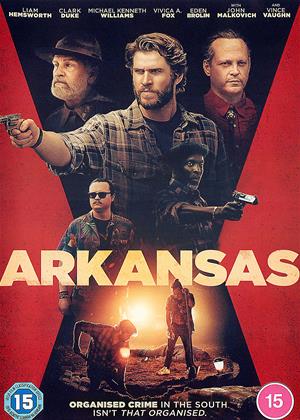 There’s a Fargo allure to the way Arkansas approaches its southern crime drama that spans ages of quiet quirks. Somewhere in the third act as the characters drift between mistakes that were made and legends that were built, one character remarks a saying akin to Arkansas being whatever they want it to be. Ripped from its novel source material, the film stirs and stews itself just right for a cunning enough crime drama that walks a delicate balance of tension and tragedy.

Separated into chapters akin to the novel, the film takes place between the 1980s and the present day. In the 1980s, we follow the rise of Frog (Vince Vaughn) from a plucky pawnshop owner to a man who silently fell into a life of drug dealing. It was business as usual of bootleg tapes until one seller dumps a dose of drugs in his lap. He knows a few people that can help him make a mint off this resource. He also knows he’ll become the target of others who want it. Vaughn’s character is not quite smart enough to amass a rich criminal underground but wise enough to know when to stab an opposing gangster in the eye with a fork. He associates with the right clientele as he as quietly rests upon his rural hideaway.

In the present, there are some new gangsters at work in the Southern drug game. Liam Hemsworth plays Kyle, the newest enforcer on the scene, seeking to find some meaning on a new mission. He’s paired up with the oddly-named Swin (Clark Duke), an eccentric young dealer who is so overly confident he believes it’s easy enough for anyone to be his friend. They end up working for the crime boss Bright (John Malkovich), assuming the alias of a park ranger to give the boys a good cover when they’re not running drugs across counties. Of course, this business is dangerous and it isn’t too long before one misunderstanding leads to Bright biting the dust, with Kyle and Swin struggling to run an empire themselves out of a park.

The likes of Kyle and Swin soon cross paths with Frog as they try to fathom their next move. They have suspicions about one another but don’t quite realize how linked their lives are. We as the audience are made aware of Frog’s retirement plan of placing two beefy boys in charge of a money-laundering business and stepping aside, as well as the lives of Kyle and Swin where a woman has entered the equation, with pregnancy and wedding on the horizon. They have not much of a clue as their lives intersect, buried in secrecy that harms them both in ways they couldn’t possibly predict.

Arkansas stages itself as a cunning enough neo-noir that finds just the right words and lets us linger with the characters just long enough to appreciate them all the more. There are wit and smarts to their voyage through a Southern wonderland of dirty money. Take for example the scene when Frog meets with his new supplier of Almond (Michael Kenneth Williams). They don’t trust each other upon first meeting, both gripping their guns behind their back as they try to confirm identities. Trust is yet to be established. And even when it is established, there’s always a fear that it could break quick. But Frog is posed as someone with enough cunning to work his way up the chain, at one point being told by Almond to slow down less he kill off his customers with too much drugs going out a week.

Arkansas is loaded with plenty of off-kilter violence and dialogue that lingers with a sense of modern poetry and believable candor. The likes of Kyle and Swin are quirky enough to be a pair with chemistry yet never overdoing their performances so that their screw-ups and shoot-ups come about with both organic flow and furious gusto. And, surprise, Clark Duke actually directed this film and pulls off one hell of a palpable thriller for playing three roles of director, actor, and co-screenwriter. What a fantastic directorial effort from a familiar character actor, delivering on a delicious dose of crime drama most engaging.