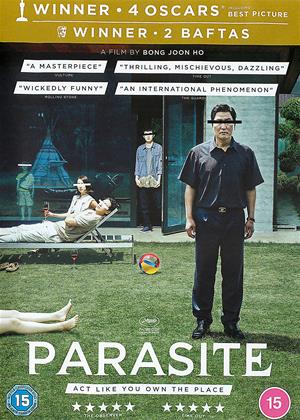 I was unsure whether I would enjoy this film and I cannot say too much without giving away spoilers. Suffice to say that it is well acted, hugely original, funny and uncomfortable in equal measures. Give it a chance even if you do not like subtitles you will not see another film like it.

Focusing on the interweaving of two families - one rich and one poor - this is a superbly shot and acted film which manages to be dramatic, funny and occasionally violent without in any way compromising the strong and coherent storyline which makes it such a good view. Definitely deserved the awards it has received.

Seduced by the Oscar-winning hype, anyone hoping for another movie as riveting as Shoplifters will be disappointed. It’s engaging enough if you stick with it, but it’s over-ripe, long-winded and far too cumbersome for its 2hr run-time. A family of four ingratiate themselves as home helps into a wealthy family’s confidence. When things start to go wrong (after a whole hour) it descends into farce. No spoilers about the outcome, but by the end you probably won’t care what happens.

Bong Joon-Ho is a great director but this isn’t his best screenplay. If you also thought Snowpiercer, his one American movie, was a dud (not his fault), do yourself a favour and watch The Host or Memories of Murder.

I found Parasite to be highly amusing, even though it treats a serious theme of a group of people who are poor and those who are wealthy. In addition there are scenes of violence. I cannot write more as I do not want to introduce spoilers.

Heard this film described as " Shakespearian" and a clash between two families separated by class & wealth. It is more a sad tail of a family on the make willing to sacrifice everyone of whatever class to their needs. Their callousness towards everyone else removes any real humour from the film and also completely removes any sympathy we initially have for them. I was expecting something far more interesting and was profoundly disappointed

I watched it because of the Oscar publicity, but was disappointed. Without giving too much away there is rather more gore than I would normally want to watch. None of the leading protagonists had much by way of appealing characteristics.

Good movie but not amazing - Parasite review by TH

I did expect amazing things from a movie getting so much buzz. Is it any good? Well it's a bit different but I would say the tone is all over the place (likely the idea). I would say people should go watch it but I doubt most people will watch this film multiple times.

Like a Capra or Lubitsch screwball - Parasite review by BD

It draws you in from the first frame - witty, stylish and hilarious with a tough inner core. It will linger.  It’s every bit as good as people have said.

I'm very wary of Oscar winning films as many winners and expectations weren't high for the first foreign subtitled film to win best picture. Wholly deserved though. An original story line that twist and turns held our interest throughout. Imaginative and dark and I don't want to give anything away, so beware of even vague spoilers when reading reviews. Suffice to say it's one of the best films we've seen this year.

Fascinating film full of twists and turns: a bit like GET OUT but focused on wealth not race - Parasite review by PV

I had no idea what to expect with this. Though when it won Best Picture Oscar and the #OscarsSoWhite were still wailing., one does wonder whether they even opened their eyes....

I liked the handbrake turn plot twists in this - no spoilers but usually exactly halfway through act 2 at the precise middle of the movie there is a major change. And the interesting characters too. It is a bit like GET OUT but focused on division versus belong according to wealth, not race. Because mostly it is social class/wealth that divides people, not skin colour at all (the 2 may coincide of course).

It reminds me too of THE SECRET IN THEIR EYES and some other continental films, also AND SOON THE DARKNESS (1970). Sinister and twisty. Dark humour for some. It was 2 hours but I was never bored and it's not overlong like most Hollywood efforts.

I disliked some of the theatricality but you often get this in foreign films - watch the Italian MONTALBANO on TV. Also, a slight lack of realism maybe - mobile phones do feature a lot in this movie, but not at points when one would have changed the plot. Convenient, that. And a tutor (and I have been one) would never be allowed to behave like that either!

I also liked the ending. Very un-Hollywood in so many ways.

Bong Joon-ho’s films have a personal yet international appeal in terms of themes addressed. Throughout his work is a clear observation on class struggle, often posed through a sci-fi allegory that often goes soberingly blunt at times. Parasite is his most vicious film for this aspect, tackling class division head-on in a thriller that starts off darkly comedic and turns just plain dark by the end of the picture.

In South Korea, a family of four struggles to make ends meet from their basement apartment. They leech wi-fi to find gigs, take on jobs of making pizza boxes for little money, and rely on the community bug-sprayer for free fumigation, while they’re in the apartment. Desperate for any job they can find, the son gets a bit of luck when a friend recommends him as a tutor for a wealthy family, residing high up in the rich part of town. With the aid of his family, he is able to stage his way into the good graces of this rich yet easily outsmarted family.

The son then recognizes openings, desires that could be fulfilled by the rest of the family. The entire poor family construct an elaborate plan to all acquire jobs within the lavish estate. They pretend not to know each other and fabricate just enough information on their skills to be hired. This ranges from the simple deception of the daughter pretending she’s enough of an art expert to be hired for tutoring the young boy of the rich household to finding a way to fire the current house maid for the poor mother to move in.

For the first half of the film, it’s a well-tuned dark comedy of a poor family deceiving a rich family. Their plan is so complex and rehearsed that it’s an immaculate play of trying to make a living that is pleasing for the assembly and morally questionable considering their attack against the maid is to fake her having TB. The poor family becomes so good at their gig that it seems as though they’re headed down a path to being the antagonists of this picture, especially for a heated moment they all have together when it seems their lives are all figured out. But then there’s that twist lurking in the rich home’s basement that drastically shifts the picture into a much more sinister and earth-shaking film that is absolutely frightening and shocking.

Bong’s style is in top form with this picture in how he stages the entire picture. There’s the obvious symbolism in the way the rich and poor families are housed, the destitute underground and the well-to-do residing high. But there’s something compelling in nearly every frame. Take a look at every shot within the rich family’s home. Every shot seems to have something dividing the rich and poor, be it a wall, a pillar, or a line in the paths. One of the most memorable shots features the maid addressing the matriarch of the house, seen through a window with a separating pane. The maid claps her hands across the divide, waking up the sleeping mother. It’s a subtle yet effective and iconic take on the crossing of lines that will come to violent blows in the more explosive third-act climax.

Bong stated in an interview that he intended Parasite to be more of a Korean specific film unlike his previous pictures of Snowpiercer and Okja. He want to highlight the horrific divide of class and the crashing problems in capitalism that breeds this discontent. He was a bit surprised to discover this was just as big a problem in America as it was in Korea, generating an international appeal that most likely led to Bong selling the rights for an American remake. Whether the remake will be too watered down is anybody’s guess, but as it stands, Parasite is such a perfect picture for tackling the current concerns of eating the rich in a beautifully staged and deeply uncomfortable film, more than worthy of becoming the first South Korean film to win the Academy Award for Best Picture.