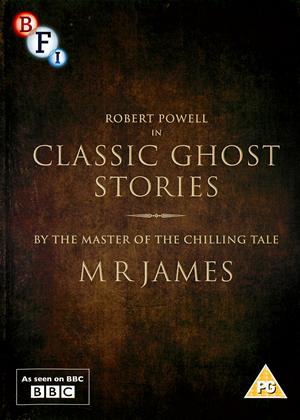 Synopsis:
From the cosy confines of his study, a learned professor (Robert Powell) tells five terrifying tales. Inspired by M.R. James' legendary readings of his own works, these vintage ghost stories were originally broadcast over the Christmas of 1986 and have been unavailable on video until now.
In 'The Mezzotint' a haunted picture slowly reveals the horrors of the past, whilst 'The Ash-Tree' tells of the execution of a witch and the dreadful curse she places on the Fell family. 'Wailing Well' involves a troop of scouts who find that curiosity can be fatal, and 'Oh, Whistle, and I'll Come to You, My Lad' concerns itself with an academic who gets more than he bargained for after he discovers an enchanted whistle. Finally, in 'The Rose Garden', disturbing visions upset Mrs Ansthruther's gardening plans.
Long unseen and much sought after, these celebrated readings are accompanied here by three episodes from the rare BBC series 'Spine Chillers', in which the acclaimed actor Michael Bryant (A Ghost Story for Christmas: The Treasure of Abbot Thomas) plays the M.R. James - like storyteller.
Actors:
Robert Powell, Norman Bacon, Michael Richmond, Jeremy Roberts, Cameron Miller, Arthur Nightingale, John Beardmore, John Cannon, Peter Creasey, Ken Parry, Fred Reford, Barry Summerford
Directors:
David Bell
Producers:
Angela Beeching
Narrated By:
Robert Powell, Michael Bryant
Creators:
Robert Powell
Writers:
David Bell, Mr. James
Studio:
BFI Video
Genres:
Classics, Horror, TV Classics, TV Dramas, TV Horror

There have been quite a few different M. R. James adaptations over the years, mostly made by the BBC, though Jacques Tourneur's classic horror film "The Night Of The Demon", closely based on "Casting The Runes", is, I think, the only big screen version of one of his tales. Which is understandable, since none of them are long enough for that kind of treatment without a great deal of padding. The best effort by the BBC is their 1968 dramatization of "Oh Whistle And I'll Come To You My Lad" starring Michael Hordern, which is also available on DVD.

Unfortunately, this DVD shows the beeb at their laziest. Robert Powell is a good actor who can be very creepy (it's a shame he never got to play the Joker), but simply having him dress up as M. R. James and read these stories aloud as dramatically as possible stretches his talent too far, especially when it comes to the rustic and/or female voices. Some years after this series was made, the BBC tried something similar with Sir Christopher Lee which worked far better, because his voice was absolutely perfect, whereas Robert Powell's simply isn't.

To liven things up, we're very occasionally treated to a brief, silent clip of dramatized action. This almost never works. The D-list actors hired for these tiny parts are terrible, and when special effects are attempted, "special" they're not! One scene in particular has Robert Powell reading words that, taken by themselves, suggest something deeply disturbing, over visuals which - well, the phrase "killer muppets" inevitably springs to mind... Even the stories are poorly chosen. Given that there are only five of them, it's odd that one should be an obscure tale written for schoolboys, the juvenile tone of which is completely different from the rest.

"Much sought after", it says in the synopsis. By whom, exactly? Presumably people who didn't see them the first time round and assumed they'd be better than they are, and the Robert Powell Fan Club. Even the quality of the picture isn't that great. 1986 was long after the era when videotape was so expensive that the BBC routinely recycled it, so I can only assume they thought so little of this series that they couldn't be bothered to keep a really good copy. They had a point.

Obtain a book of short stories by M. R. James (your local library will probably have everything he ever wrote in one volume) and read a few of them after dark, alone in a room lit only by one reading lamp. If you don't find yourself glancing nervously at the shadows, you probably aren't human. That's the effect this penny-pinching travesty tries to achieve. It doesn't.

Not what I expected - Classic Ghost Stories by M.R. James review by CP Customer

My fault, but I had assumed that this would be a collection of short acted ghost stories, speciifically the BBC ones aired around xmas, instead it was Robert Powell telling ghost stories in a smoking jacket in a candlelit room in a slightly off putting voice.

I couldn't concentrate on the stories as his voice and the room was so distracting.

I was 1 years old when it was originally aired so my attention span can't cope.