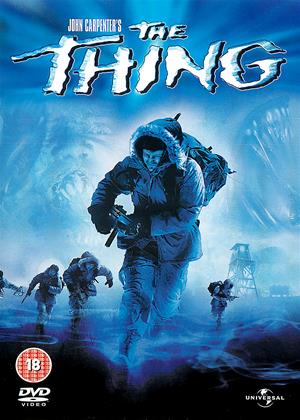 Reviews (1) of The Thing

4K is amazing - The Thing review by JR

The Thing is a classic and you probably know it inside out cos you have amazing taste in movies. But this 4K version is incredible. The audio is crystal clear and the music really shines. Feels like a new lease of life for this one. Highly recommended.

“Man is the warmest place to hide”. And thus begins one of the most misunderstood (in its time), overlooked, and critically bashed films of recent history – In the Name of the King. Joking: it’s John Carpenter’s The Thing (1982).

The Thing is the best horror, period. It perfectly blends suspense, thriller elements, ‘body-snatching’ tropes, Kurt Russell’s beard (and drinking habits), Keith David’s gritty voice, a bunch of unforgettable special effects – even to this very day – and no women whatsoever. Is this why The Thing is so good? Well, no, but it’s all in the directing, creature effects, and lack of information the audience is getting. And Ennio Morricone’s haunting score. And the source material by John W. Campbell Jr. (which I heard was as straightforward and linear as it gets, but didn’t bother to read it myself).

The film has MacReady (Kurt Russell) playing chess with a computer, and losing. After which, he pours a glass of whiskey IN the computer, and wins; while the computer dies. And this is exactly why The Thing is so good: it manages to set up characters in mere minutes, if not second, without them even speaking a single word. From this scene, we (the audience) quickly realize that he’s a brute, but also a smart brute who likes to play chess and, also, likes to win. He is astute, stoic, but also unpredictable – a brute trickster if you will – who can outgun you while he himself is outgunned; and he has a beard.

Then, as the suspense slowly creeps up… in fact, the suspense never lets go in the first place! Right from the get-go, as those [YOU-KNOW-WHO] people get mowed down, it’s not really clear as to who is what to whom, and whom to who is the antagonist in the film. Which is all about the genius directing and editing in the film – and that’s non-debatable.

And another word we didn’t mention, and which The Thing exceeds at managing to provoke – is paranoia. Man, the remote Antarctica atmosphere, the haunting score (mentioning twice), the uncertainty of what will happen next, and the sole fact that there is an alien creature hiding in some of the crew (who can be anywhere) – and mimicking them to perfection – is the perfect setup that Carpenter uses to create the best horror film of all times. And the way the film ends… well that’s just excellent directing.

Finally, should you watch The Thing? Yes, and yes. It’s the perfect film to watch on a cozy winter Sunday night, neatly wrapped in a blanket by your own choosing, and having some diapers in handy for just in case.