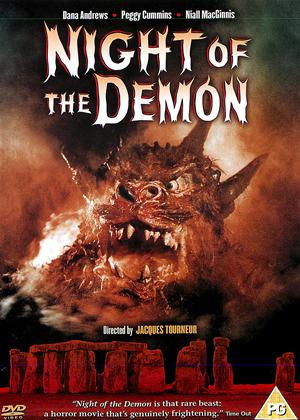 Reviews (5) of Night of the Demon

It Follows... - Night of the Demon review by Count Otto Black

This almost-brilliant but flawed semi-masterpiece is very good indeed some of the time, but at other times it flags badly. Part of the problem is that its source material, "Casting The Runes" by M. R. James, is a short story (easily available online if you want to compare it with this adaptation), therefore in order to spin it out to an hour and a half, a lot of subplots have to be inserted wherever they'll fit, and some fit better than others. For instance, would a man who is going to be torn apart by an actual demon from hell in a few days really take time out from trying to escaping his ghastly fate while he awkwardly romances some girl he's just met?

The best scenes are those lifted more or less directly from the source material. The demon, though almost inescapable, cannot strike before a set time has passed, but as the deadline approaches, the hints that something is closing in on the victim become more and more blatant, and nightmarishly surreal happenings that uneasily skirt the borders between hallucination, coincidence, and downright devilry literally dog his footsteps. Jacques Tourneur, always better at portraying implied psychological horror than in-your-face nastiness, handles this material superbly, especially the scene in which the hero is chased through the woods by an entity which, its appointed time not having arrived yet, hasn't quite broken through into our reality and exists semi-abstractly as a sort of satanic UFO. And the diabolical Karswell is very well played indeed by Niall MacGinnis, effortlessly switching between harmless affability and casually matter-of-fact menace, even while wearing full clown makeup - remember that this film was made decades before scary clowns became a cliché.

Where it goes a bit off-track is in making its hero so unlikeable. He's a rational and thoroughly skeptical scientist who constantly and extremely rudely denies the reality of the paranormal, so of course he turns out to be 100% wrong and it nearly costs him his life. But does he really need to take so long to catch on that supernatural beings are out to get him when the truth is staring him in the face? Part of this is probably the result of re-editing by the studio, which resulted in Jacques Tourneur taking his name off the picture. Apparently he wanted the existence of the demon to much more ambiguous, making it plausible for the hero to refuse to believe in it. In particular, he wanted the creature itself to be shown only for one-fifth of a second, leaving the audience wondering whether they'd seen it or not. But the studio bosses reckoned that, as with some of Tourneur's other films, footage needed to be inserted explicitly giving the customers the monster they were promised by the title. And, as you can see from the picture above, Tourneur lost the debate.

However, it's still a very good film despite its faults. Its portrayal of weirdly puritanical devil-worshippers is so off-the-wall that I wanted to see far more of them and whatever it was they got up to. And it's always a joy to witness actors who later became fixtures in long-running sitcoms doing something completely different early in their careers, in this case the amiable Foggy Dewhurst from "Last Of The Summer Wine" as a clinically insane murderer who worships Satan.

By the way, "Night Of The Eagle" (1962), although based on an unrelated short story by Fritz Leiber, has such a similar title because it's almost a remake, dealing with much the same themes in an even more bizarre way, and might make an interesting double bill with this film.

Horror Classic. - Night of the Demon review by Steve

Loosely based on legendary horror writer M.R. James' The Casting of the Runes and directed by Val Lewton's favourite, Jacques Tourneur, Night of the Demon is a noirish face off between US sceptic Dana Andrews and malevolent occultist Niall MacGinnis.

Andrews could be a little anaemic at times, though he is fine here. But he is no match for a compelling performance by MacGinnis as the Crowleyesque necromancer. The scene where the sorcerer scares the pants off the American empiricist with an exhibition of his power in the woods of his stately home is a delight.

The smallest of parts is cast with care to great effect, particularly Athene Seyler as MacGinnis' occultist mother. And Brian Wilde is memorable as a cursed yokel: It's in the trees. It's coming! Peggy Cummings spars enjoyably with Andrews. The supporting casts of British films in the years after the war bring such rich reward.

Critics will argue about whether the demon should have been pictured at all, or if we should be left unaware whether it is real or not. I'd miss it if it wasn't there, and for its time, the model and effects aren't bad either.

It's in the trees. - Night of the Demon review by SQ

Creepy intelligent and thrillng as science and the occult collide.Fantastic atmosphere as psychologist Holden edges ever closer to the ( very unscientific) realisation that a demon is coming for him.

Dated psychological thriller - Night of the Demon review by DR

Considering the age of the film, the action scenes are well managed, although currently the appearance of the demon would be more terrifyingly anthropomorphic. The plot develops well, following from initial scepticism to final acceptance of the existence of the demon. The motives of the perpetrator are nebulous. His affluence is attributed to the demon, but the only group of enchanted people encountered seem miserably poor and unable to contribute much to his lifestyle. The origin and transfer of the runes to the intended victims was presented in a sketchy manner. Nevertheless this film maintains drama and excitement to the end.

Oh happy days! Remember when people make movies to tell a good story and not tick woke diversity boxes! I think many movies have a 20% white male limit now - the BBC certainly do.

I remember watching this aged about 10 on our rented black and white telly and remember it from them - not all but the demon scenes and slip of paper bits for sure. It's in the same class as other 1950s classics The Midwitch Cuckoos and The Day The Earth Stood Still. Those two (which I also remember watching aged 10/11 on TV) have been remade in recent years - horribly - and that is the true horror. I pray to the gods and demons they never try to remake this wonderful, beautiful, scary, spooky, memorable classic British film.

And yes, of course, Kate Bush sampled the "It's in the trees - it's coming" from the medium scene, actually, not the initial demon experience. Loved that scene, the playing with sound and voices. The camp medium is also spot on!

Acting is great - the US element may not have been in the original MR James short story, I do not know. But handy for US sales, so American interest often shoe-horned into movies, then and now.

As others have said, the main Alistair-Crowley-type character is beautifully played as are so many (Mr Barraclough from Porridge plays the mental patient under hypnosis).

And some scenes are genuinely scary and made me jump - the Halloween scene, for example.

AND for 1957, the special effects are pretty decent too - I am sure kids would watch this and be spooked (so much so when shown on TV the announcer states some scenes may be too scary for younger children; I disagree - show it to all ages to scare em silly and show them what great films used to look like because OTT CGI special effects and quick-tick editing). It all makes a refreshing change from the yawnsome and trite CGI of now, that's for sure, as do many of those old Ray Harryhausen movies. More believable too, oddly.

Some decent photography - close-ups and distance shots which I am sure come from German expressionism.

Anyone at all interested in film or who just wants a great 1 hour 50 minutes of class and scary entertainment should watch this classic old film which is genuinely spooky and just SO satisfying.

There is NO issue in this being made from a short story at all. Compare to modern Hollywood films which average 2 and a half hours - so full of flab and false endings, I often lose interest. You do of course have to suspend disbelief AS WITH ALL FICTION. The leading man needs romantic interest - and he is not unlikeable. Just rational. The spiritually-minded who believe in angels may not like that, but...

Forget the X-files. This does the believer/sceptic debate better.