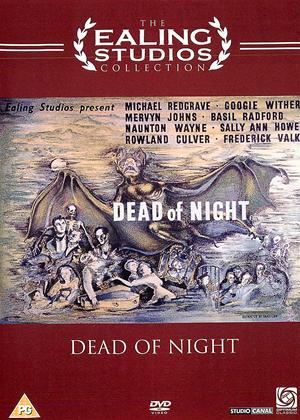 Reviews (3) of Dead of Night

Terrific! They don't make em like this etc etc - Dead of Night review by Mehitabel

Five stories, ranging from gentle and funny to truly unsettling, are linked by their protagonsts meeting at a country house. Never mind that it's in b&w, or that they all speak with that vanished (or rather, venished) clipped British English of the 30s and 40s.. Or that there are no clever special effects or jump-moments.. Each story is self-contained, but you are also dying to know what will happen at the end..

My only gripe is that when we finally get there, it's unconvincing. But by then, it just doesn't matter.

Five stories of the supernatural or inexplicable told by the occupants of a country house. The stories range from the comic through some standard ghost stories to the two most disturbing tales, one involving a mirror and the one which everyone remembers about a ventriloquist. This last tale is a tour de force by Michael Redgrave as the ventriloquist who is either deranged or under the control of his dummy Hugo - we never really find out which. The black and white film is showing its age a bit but well worth seeing.

Ealing films, the warm and cosy home of lovingly crafted British comedies, branched out into slightly more unnerving territory with this early anthology. At a country house, in an age where, following communal afternoon tea, the local doctor likes to offer round the cigarettes, Walter Craig (Mervyn Johns) turns up and recognises the ensemble (none of whom he has ever met) from his recurring dreams.

In this world, where everyone speaks in the clipped tones of racing horse commentators, (“I can’t leave. This is Mr Craig and I’m a character in his dream.” “Oh how do you do? Such fun, charades!”) the anecdotal stories everyone tells merely confirm Craig’s suspicions. He can see their future: he knows what is going to happen.

I cannot knock a 72 year old production for being dated, so I won’t. But it is. The extreme politeness and styles are often difficult to get past, even harder to take seriously. To begin with, such chills as there are are very tame and wholesome. The segment featuring the malevolent mirror is where things pick up, giving the impression ‘Dead of Night’ is unveiling its frights in a measured way. Until the following dreadful golfing farce sequence lets things down. “Totally incredible and decidedly improper,” to quote Mrs Foley (Mary Merrall).

If you can sit through that segment, the best and most widely remembered is saved till last. Maxwell Frere (Michael Redgrave) is a ventriloquist, performing and popular with packed audiences every night. So when it becomes apparent that the dummy Hugo appears to be the controlling element of the partnership, initially amusing music-hall scenes become genuinely tense. This is partly due to the writing, in which Hugo’s comedy jibes to his partner become increasingly spiteful, and Redgrave’s performance, in which the showbiz charade slips and he becomes edgy whilst still continuing with the act.

The Director for this final segment is Alberto Cavalcanti, who eschews the brightly lit jollity of the other stories and coaxes an intense performance from Redgrave. To say this finale is the best of the bunch is understating things. In its way, it is a masterpiece.

In case Walter Craig’s plight has been forgotten in all this, the twist ending gives the film’s climactic moments a nice sense of closure.