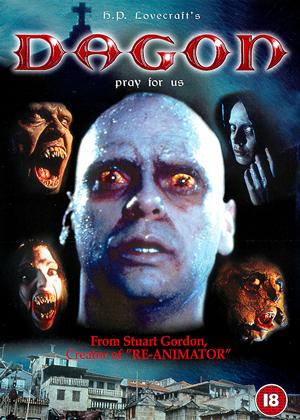 Synopsis:
Marooned in a malevolent storm off a bleak and desolate Isle, Paul and Barbara seek shelter in a grim and soulless village. When Barbara vanishes amid the deformed and repulsive villagers they encounter, Paul sets out on a frantic pursuit to uncover her whereabouts and the secret that lies dormant beneath the cavernous ruins of the devastated township. What he discovers awakens an unnameable horror that will shatter his very existence and unleash upon the world a gruesome legend until now concealed in the deepest, darkest bowels of the ocean floor. None who hears of it believes. None who discovers it escapes. None who confronts it survives.
Actors:
Ezra Godden, Francisco Rabal, Raquel Meroño, Macarena Gómez, Brendan Price, Birgit Bofarull, Uxía Blanco, Ferran Lahoz, Joan Minguell, Alfredo Villa, José Lifante, Javier Sandoval, Victor Barreira, Fernando Gil, Jorge Luis Pérez, Ignacio Carreño, Diego Herberg, Óscar García, José Manuel Torres, Lydia González
Directors:
Stuart Gordon
Writers:
H.P. Lovecraft, Dennis Paoli
Studio:
Metrodome
Genres:
Horror
Countries:
Spain, Horror

There have been several film adaptions of the stories of HP Lovecraft over the years, some considerably more successful than others. Of those I have seen, I would say that this Spanish (though English-speaking) version is the best of them all to date. In fact, this is superb, although the story is really an adaption of HP’s ‘The Shadow over Innsmouth’ than ‘Dagon’.

After running into trouble on their small boat, Paul and Barbara (Ezra Godden and Raquel Merono) and another couple drift towards hopeful salvation in a remote fishing town, Imboca. Immediately, there is a sense of forbidding about this town – it seems deserted, the clouds above are heavier and greyer, the streets are dripping with a permanent mould. As they enter Imboca, the atmosphere becomes thicker and fouler. Figures, half-seen, scuttle about the streets, behind ruined windows.

This intense atmosphere is sustained brilliantly throughout and creates such a web of dark fantasy that the occasional, very convincing gore effects (the character Ezequiel (Pablo Rabal) having his face peeled off is the most extreme) actually threaten to spoil such a beautifully macabre mood. The subtlety of much of the make-up for the residents (glimpses of livid gills on the morose hotel proprietor for example, unnaturally oily skin, hooded eyelids) is hugely successful. So too is the overall stink of the place, the rancid decay in the hotel through which Paul tries to make his escape from the terrifying fish-people and the inescapable feeling of doom conveyed through skilful direction and storytelling.

A word too for Macarena Gómez as Uxía Cambarro, who combines intense beauty with startling and exotic vampire-like persuasiveness as she convinces Paul that his fate and hers are unavoidably intertwined. This, and some very good effects, combine to ensure she is truly demonic.

Not what I'd call a Horror film - Dagon review by HH

I found this film very boring, although I stuck it out until the end to see if it would improve. It didn't and was, frankly, a bit silly. Certainly not a horror film in my book.